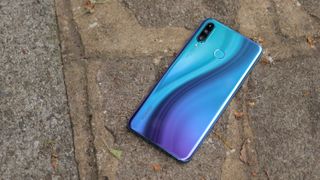 Huawei has relaunched last year's Huawei P30 Lite, with some slightly upgraded specs, as it looks to boost sales of existing phones not affected by the ongoing ban that limits access to Google's services on new Huawei devices.

The Huawei P30 Lite New Edition looks the same as 2019's version of the phone, but comes with slightly improved internals.

This new version offers 6GB of RAM at the base level (up from 4GB on the original), and while still offering a 128GB storage variant it will now also come with 256GB as an option.

Everything else about the device is the same as the original Huawei P30 Lite, and it's clear the company has released it as a way to rejuvenate sales of existing devices.

That's because Huawei is currently unable to include the full suite of Google services on any truly 'new' (rather than just tweaked) Android phone thanks to the ongoing Huawei ban in the US. So you will get the full Android experience with this handset, but not with the upcoming Huawei P40 for example.

Those in the UK are able to pick up the P30 Lite New Edition from today, where it starts at £299. It's currently unclear which retailers will be stocking the phone.

It's unlikely that the device will be sold in the US, but we expect this new version of the P30 Lite will land in other countries in the coming months.