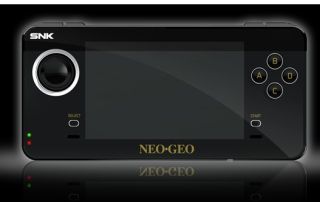 Manufacturer Blaze has confirmed that it is producing a NeoGeo handheld console featuring games from the '90s.

The pocket retro-gaming console was leaked in January, and it appears that, apart from the screen size, most of the specs listed were accurate down to the list of included games.

For those of you who didn't catch it first time around, the Neo Geo X will include an SD card slot, A/V output, internal stereo speakers and a headphone socket.

The original leak suggested the NeoGeo X would have a 4.3-inch screen, but Blaze has now confirmed that it will have a smaller 3.5-inch LCD.

When the photos first surfaced, we picked out that the NeoGeo X bears a striking resemblance to the iPhone 4/4S, and that certainly hasn't changed. In fact with the confirmation of identical screen size to Apple's mobile, the similarity looks to be even more striking in the flesh.

It still has the full complement of gaming controls, though – an analogue thumb stick, four face buttons and four shoulder buttons are all present and correct, plus start and select keys.

The NeoGeo X will be distributed in Europe by Blaze – a company with a history of producing retro handhelds. The Sega Megadrive and Atari titles have all been given the handheld treatment.

Jason Cooper of Blaze said: "The NEOGEO console has always been a personal favorite of mine and I am delighted to be involved with the development of this new handheld console. We hope to re-ignite the excitement many of us felt twenty one years ago, in a more affordable manner, to a much wider audience."

The Neo Geo X is touted for a Q2 release, and here's the full list of 20 confirmed games that will come loaded on the console: