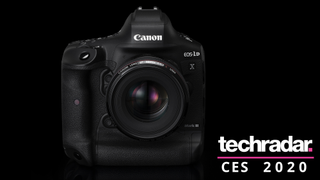 DSLRs might be seen by many as the dinosaurs of the camera world, but the new Canon 1DX Mark III is here to prove that they can still be exciting photographic innovators.

The new powerhouse of sports photography, which was teased in a 'development announcement' last year, was fully revealed at CES 2020 – and the 1DX Mark III mixes powerful DSLR shooting with some of the latest mirrorless tech, just in time for pro snappers to take it to the Tokyo 2020 Olympics.

Canon has managed to outdo 2016's 1DX Mark II through a combination of pushing DSLR tech to the limit and throwing in some of the latest mirrorless tech. The 1DX Mark III still has a 20.1MP full-frame sensor, but this is now joined by a powerful new Digic X processor, a new AF sensor for improved viewfinder shooting, and the promise of 20fps burst shooting speeds with both the mechanical and electronic shutter.

Because the 1DX Mark III takes the new, pricey CFExpress cards – which can manage read speeds of 1.8GB per second – it also boasts an amazing buffer that can manage unlimited JPEGs and up to 1,000 Raw files. Combine that with those 20fps burst shooting speeds, and you have a potentially incredible tool for sports or wildlife shooting.

Of course, speed is only one part of the photographic equation, so Canon has also boosted the 1DX Mark III's autofocus skills through a combination of current AF tech (191 AF points for viewfinder shooting, Dual Pixel AF in Live View) and something it's calling 'deep learning' autofocus.

The start of next-gen Canon autofocus

In an attempt to close the autofocus gap on Sony, which has leaped ahead with its 'A.I-based' Real-time tracking, Canon has introduced 'deep learning' autofocus on the 1DX Mark III.

This next-gen AF system, which goes beyond the limitations of today's Face Detection, draws on a vast database of images to automatically create an algorithm that apparently allows the 1DX Mark III to quickly lock focus on human subjects in action sequences. Current Face Detection needs the subjects's face to be visible to work. But like Sony's subject tracking, Canon's 'deep learning' can recognize that a person is in the shot and keep them centered in the frame.

This doesn't mean the 1DX Mark III is 'learning' from its user – the program is run externally by Canon and then loaded onto the camera, though its database can be expanded over time to cover other subjects like animals. Currently, the feature requires a Digic X processor too, so it won't be coming to existing Canon cameras via a firmware update, but Canon has hinted that it could eventually appear on more affordable cameras in the future.

So what other new features does the Canon 1DX Mark III bring? One of the most interesting is the new Smart Controller, which is a touch-sensitive AF-ON button for quickly choosing your autofocus point. It sounds relatively minor, but we found it to be one of the 1DX Mark III's best features during our Hands-on: Canon 1DX Mark III review.

The sports DSLR also promises to be a performance step up from the 1DX Mark II in most other areas, including high ISO performance (the extended range is now between ISO 50-819,200) and dynamic range, thanks to what Canon is calling a revolutionary High Detail Low-Pass Filter.

One of the most interesting boosts to the 1DX Mark III, though, is its video shooting powers. While it's mainly aimed at stills photographers, the camera can now shoot 4K at 60fps and Raw video using the full width of the sensor. Video editors and colorists will also appreciate its ability to shoot 10-bit 4:2:2 footage with internal Canon Log recording.

That said, 4K video recording is still limited to 30 minutes at a time, and despite early rumors to the contrary, there's still no in-body image stabilization on the 1DX Mark III - which means cameras like the Panasonic S1H retain an advantage there.

So how much will all these new features set you back? The Canon 1DX Mark III will be available to buy from the end of February for £6,499.99 (about $8,507 / AU$12,241). That's a little beyond most non-professionals, but we look forward to testing it fully and ultimately comparing it to the incoming Nikon D6 and Sony A9 II, to find out which camera deserves to top the photographic podium as this summer's Tokyo 2020 Olympics.