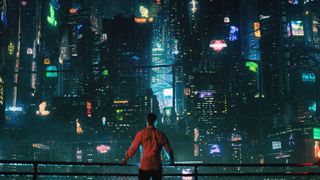 Altered Carbon season 2 begins on February 27, Netflix has revealed. The sci-fi show, based on Richard K Morgan's novels, returns two years after season one was released on Netflix, and this time stars Anthony Mackie instead of Joel Kinnaman as character Takeshi Kovacs.

If you watch the show, you'll already know that's because characters in this universe can trade physical forms, with their consciousness moving between bodies. That process is known as 're-sleeving'. It's no doubt pretty handy if you're a TV producer and want to swap in a shiny new lead actor for your next season.

Mackie is joined by Simone Missick of Luke Cage fame this time around, as well as the returning Chris Conroy as AI Edgar Poe. Altered Carbon was created by Laeta Kalgoridis, co-writer of Alita: Battle Angel.

In season 2, Kovacs will continue to search for his missing lover, Quellcrist Falconer, played by Renée Elise Goldsberry. Like the first season, expect an unsolved and brutal crime to drive the story, and for this case to coincide with the search for Kovacs' long-lost partner.

Altered Carbon didn't quite crack our list of the best Netflix shows, and among mostly positive reviews for its flashy-looking first season, some called out the show's excessive violence.

Still, it seems like a good thing that someone is making a big-budget sci-fi show that isn't part of the Star Trek or Star Wars universes in 2020 – see also The Expanse on Amazon Prime Video, which released its fourth season in December, and has a fifth on the way.