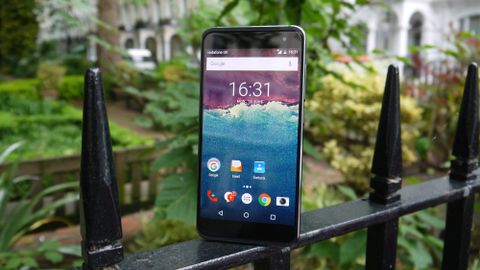 Vodafone has delivered on its promise of a premium smartphone experience for a less-than-premium price. It might not be up there with the top ranks in any one area, but it's far closer than the mid-range also-rans where it really matters.

The Vodafone Smart Platinum 7 is quite the smartphone pioneer, in its own understated way. It's the first own-branded phone from a UK mobile network that truly merits the term 'premium'.

Despite this, the Smart Platinum 7 can be picked up for just £300 on pay as you go, or from £28 per month on contract. This combination of low price and premium design pitches the phone against the likes of the OnePlus 3 and the Oppo F1 Plus – two strong flagship-killers from China – as well as the Nexus 5X, which actually looks a little pricey by comparison.

Vodafone's new hero handset certainly seems well equipped for the fight, with a metal and glass design, a 5.5-inch QHD display, a capable octa-core CPU and a well-appointed 16-megapixel camera, not to mention a near-stock version of Android 6.0 Marshmallow.

The Smart Platinum 7 also tempts with little flourishes such as a rear-mounted fingerprint sensor and a dedicated camera button. Has Vodafone struck gold with its first high-end effort?

This is Vodafone's first luxury phone, and its marketing department is clearly having a ball with the attendant shift in vocabulary.

The press blurb for the Smart Platinum 7 throws around flowery expressions like "aircraft grade aluminium body" and "diamond cut detailing", along with my particular favourite: "sensually curved 2.5D gorilla glass".

We didn't get any of that with the Vodafone Smart Ultra 6, that's for sure.

The Smart Platinum 7, though, is largely deserving of such gushing introductions, with a few notable missteps. Its aluminium frame is well crafted, with matte-finish sides sandwiched between shiny chamfered corners.

The power, volume, and dedicated camera keys, meanwhile, have a heavily ridged texture and angled design that makes locating and pressing them very easy – although they're not what you'd call subtle or attractive to look at.

The rear of the device, meanwhile, is covered by flat glass. Combined with a protruding, centrally placed camera unit, there's a slight hint of the Samsung Galaxy S6 in here. That's no bad thing.

However, in place of the latter's attractive underlying sheen, the Platinum 7 has a slightly tacky lattice pattern that's most evident when held at an angle. It's not exactly ugly, but it doesn't quite feel up to Vodafone's premium aspirations.

The front of the phone is more functional than sleek, with the aforementioned 2.5D glass stopping short of the top and bottom edges to reveal dual stereo speakers, which offer clear, loud, well-separated if excessively trebly sound.

This isn't quite the cohesive design we see from the more established flagship manufacturers like HTC and Samsung – there's a slight mishmash of influences and approaches on display here – but it's still easily the best-looking phone Vodafone has ever made.

It's very nice to hold, too. Thanks to those subtly rounded metallic edges, the cool glass back, a 6.9mm-thin body and a just-right 155g weight, the phone sits pleasantly in the hand. You might need to carry a cloth around with you to take care of fingerprint marks, though – the phone is a bit of a grease magnet.

As we've discussed, the defining feature of the Smart Platinum 7 is that it's Vodafone's first 'premium-design' smartphone. And another, related element of this design is the phone's display.

This is Vodafone's first ever 2K or QHD screen, and it's a beauty – it's sharp, bright, and well balanced.

That latter point is important to emphasise, because Vodafone has also bucked its usual trend by going with AMOLED display technology. This can be a slightly precarious path to take if you're a manufacturer that's trying to work to a budget – or if your name isn't Samsung, for that matter.

Use an older, inferior AMOLED panel, or neglect the calibration process, and your colour-rich display can end up being an awful, garish, hyper-real mess. The Vodafone Smart Platinum 7 screen is nothing of the sort.

Don't get me wrong: it's no Samsung Galaxy S7 rival, and it's got that familiar AMOLED weakness of being a bit rubbish in bright sunlight. But it's a lovely, crisp, colourful screen in the main.

As someone coming directly from using an iPhone 6S, the IPS LCD screen on which is often described as being cooler and bluer than your average AMOLED, I didn't find the Smart Platinum 7's screen to be overly warm – and that's a major compliment coming from a fussy blighter who couldn't live with the second-generation Moto X for that very reason.

Another ostensibly premium feature of the Smart Platinum 7 is its fingerprint sensor. This is a rear-mounted example, in keeping with the Nexus 5X school of thinking rather than the front-mounted approach of the Samsung Galaxy S7 and the iPhone 6S.

I had a mixed experience with this phone's biometric sensor – which, for a component that's judged on its consistency as much as on its speed, isn't ideal.

I found that its subtle ridge and rear location combined to make it a little too tricky to find quickly – it required a fair amount of fumbling. When I did locate it, and positioned my finger correctly, it was generally fairly reliable, but I had enough failures to make it a bit of a chore to use.

Still, being able to jump straight into the home screen by touching and holding the sensor for half a second or so made me persist with it – if only because powering the screen on, then swiping to bring up the pattern unlock screen, then inputting the pattern feels like a laborious process after the fiftieth time.

One time-saving feature I have far fewer qualms with is the Smart Platinum 7's dedicated camera button. Yes, you can use it as a physical shutter control, but that proves a little awkward given its location immediately above the camera lens. I found it much more useful for its quick-launch function, which is achieved through a double tap.

You might wonder why a classic press-and-hold wasn't employed, but Vodafone's approach resulted in far fewer pocket activations during my time with the phone – none, actually. And the speed of that camera app start-up is exemplary – you can have your phone out and snapping within a second or two.

I should mention here that Vodafone is supplying a Smart VR headset for free with early units of the Smart Platinum 7, which is presumably where that sharp display will really pay off. However, this wasn't supplied with my test unit, so I can't comment on the quality of Vodafone's VR vision.

Next Page Performance and battery life