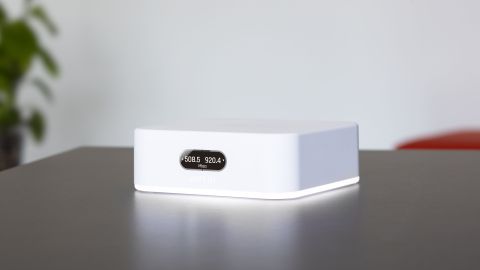 The AmpliFi Instant isn’t the fastest mesh kit around, but it provides a quick, affordable upgrade for homes that struggle to get a good Wi-Fi signal.

The AmpliFi Instant is the latest mesh networking kit from Ubiquiti. A lot of companies have been jumping onto the mesh networking bandwagon in recent months, including household names such as Google and BT, alongside traditional networking experts like Netgear and TP-Link.

That makes it hard for a newcomer like Ubiquiti to get noticed – especially when their products are a bit on the pricey side, as was the case with the AmpliFi HD mesh kit that we reviewed last year.

The AmpliFi HD was attractively designed, and provided good performance, but a price tag of $311.99 (£360, around AU$380) made it one of the most expensive mesh networking kits we’ve seen. So Ubiquiti has now come up with the AmpliFi Instant, which provides a less expensive option for people who need to improve the Wi-Fi coverage in their home.

Inevitably, there have been some cost-cutting compromises, and the Amplifi Instant is just a two-piece kit that includes a primary router and secondary ‘meshpoint’ – whereas the AmpliFi HD included a router and two mesh points – but its $179 (£183, AU$375) price tag is a lot more attractive, and this two-piece kit should still be more than adequate for most small and medium-size homes.

Just as important, though, is Ubiquiti’s emphasis on ease of use. It boasts that the AmpliFi Instant can give you ‘whole home Wi-Fi in under two minutes’ – which will certainly appeal to people who may not have much experience with routers or mesh networking.

There are two options available for the AmpliFi Instant. People in smaller homes who simply want to upgrade an older router can purchase the primary router – identifiable by the small LCD screen on the front – on its own for $99 (£112.62, AU$209).

You can then place the additional meshpoint in a room or location where your Wi-Fi is a bit unreliable, and link the meshpoint to the primary router in order to provide better wifi coverage than you’d get from a single router on its own.

Those prices are also a lot more competitive than the original AmpliFi HD, and make the AmpliFi Instant a strong rival for devices such as Google Wifi or BT Complete Home.

The AmpliFi Instant is very neatly designed, with both the primary router and secondary meshpoint simply consisting of a clean, white lozenge that measures just 98mm wide, 100mm deep, and 33mm high.

They’ll easily fit onto any nearby shelf, and the little LCD screen on the router provides quick information on upload and download speeds (and can also be scheduled to turn itself off at night, using the AmpliFi app).

Both devices are quite solidly built, but there are some signs of cost-cutting in this less expensive mesh system. The main router only has two Gigabit Ethernet ports – one of which has to be connected to your existing router to provide Internet access – while the meshpoint just has a single port.

So if you still want to have wired connections for multiple devices, such as a games console or smart-TV, then you might prefer to opt for a rival system that provides additional Ethernet ports. Both units use a USB-C port to provide their mains power supply, but there are no additional USB ports that would allow you to share a printer or hard drive with other people on your home network.

It’s not the fastest mesh system currently available either, merely offering dual-band 802.11ac Wi-Fi with a total speed of 1200Mbps. But, to be fair, that should still be perfectly adequate for most homes that simply want to browse the web, or have a bit of a video-binge on Netflix in the evening.

And, as mentioned, the real selling point for the AmpliFi Instant is its quick-and-easy set-up process. It did, admittedly, take us slightly more than two minutes to set up the main router and meshpoint in two separate rooms, but we were pleased to find that the AmpliFi app guided us through the process quickly and easily.

The app automatically detected the main router, and the meshpoint is paired with the router straight out of the box, so all we had to do was provide a name and password for our new network.

The app also includes straightforward options for setting up a guest network, and parental controls that allow you to create a schedule that limits the kids’ Internet access to the times that you specify.

Some features could be more clearly explained – such as the option for creating separate networks on the 2.4GHz and 5GHz bands – but the app will certainly appeal to beginners who just want to get their new network up and running as quickly as possible.

Here is how the  AmpliFi Instant fared in our brief suite of tests (conducted on a 100Mbps service):

The AmpliFi Instant is a fairly modest router, with a theoretical maximum speed of 1200Mbps, but it still easily outperformed the rather feeble HomeHub router provided by BT for our home broadband.

Devices in the same room as the HomeHub normally manage a speed of around 75Mbps when connected to the 2.4GHz band, and double up to a little over 140Mbps on the 5GHz band.

But that’s the ‘best case’ scenario, and we also have an office in another room where the BT Wi-Fi is simply too unreliable, so we actually use PowerLine adaptors to provide a wired connection for our office computers. The AmpliFi primary router on its own also struggled to reach that office, although it did manage modest speeds of around 35Mbps on both the 2.4GHz and 5GHz bands.

But that’s where the secondary meshpoint comes in, and setting up the meshpoint in the office boosted the Wi-Fi to a much more useable 60Mbps on the 2.4GHz band and a healthy 190Mbs on the 5GHz.

The AmpliFi Instant isn’t the fastest mesh networking system on offer, but it’s competitively priced and still provides reliable performance even in tricky spots where a single Wi-Fi router might struggle.

And while it might take a little more than two minutes to set it up, the straightforward AmpliFi app will appeal to networking newcomers who just want a quick and easy upgrade for their home Wi-Fi.