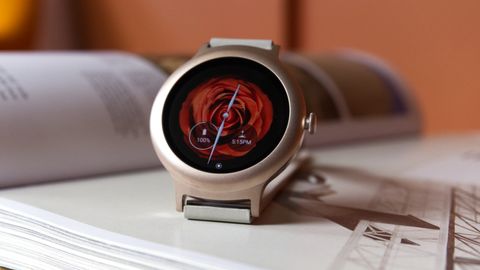 As the face of Android Wear 2.0, LG's Watch Style delighted with a thin, sophisticated look and a offers a new-found freedom from your phone. It now comes with Wear OS software

Update: We've updated this review for 2018 to add mention of Wear OS software, the lower price and it's also worth bearing in mind LG has announced a new watch called the Watch W7. It's very different to the Style.

The LG Watch Style (built in collaboration with Google) offered everything that's we thought there was to love from the best Wear OS smartwatches, ditches the dreaded flat tire, then fills in the gap with cool, useful features and a whole lot of… style.

Roll that all up and you're left with an extremely alluring presentation that makes a mighty strong argument for Google's wearable platform. But there are some familiar wrinkles here.

Battery life is still a low point, and, as independent as Android Wear 2.0 claimed to be, Google is still in the early days of filling the new Play Store with compatible apps that are enticing enough to bother with aside from its own. It now features Wear OS software, but it's largely the same product.

This watch offers just as much utility as prior smartwatch attempts, but ups the ante with a slim, dashing design and several welcome features, like the voice-activated Google Assistant and a refreshed user interface that's full of clever tweaks.

The LG Watch Style is priced aggressively compared to past smartwatches and even many of the best fitness trackers out there. The Style may not be quite as independent from your phone as the cellular-ready LG Watch Sport.

The LG Watch Style became available in early 2017 in the United States at Best Buy retail and online stores, as well as from the Google Store.

It launched at $249, but we've seen it for $199 and below. It's difficult to find the LG Watch Style in the UK and Australia, but we've seen the prices at around £190 or AU$325 from limited retailers.

On the wrist the Style is minimal indeed, which is something we've been dying to say about an Android Wear smartwatch for years. The soft and rounded sand-blasted stainless steel chassis definitely plays a big part in that. But it's also one of the lighter smartwatches we've worn at 46 grams; for the sake of comparison, the LG Watch Sport is nearly double the weight at 89 grams.

Around the watch you'll find familiar classic timepiece accents like a circular build and a prominent hardware button. A few other smartwatches, like the Moto 360 2nd Gen, the first-gen Huawei Watch and others feature such design traits.

But you'll also stumble upon some features that are unique to this watch, most notably the colorful 1.2-inch P-OLED 360 x 360 resolution (299ppi) display, which has an ambient light sensor (ALS) embedded beneath the screen. Remember the dreaded flat tire? LG and Google have figured out how to get rid of it.

Next up, the button here doubles as a twistable crown that puts a new spin on navigating through Android Wear (think: Apple Watch’s Digital Crown). So far, the only other Google watch to feature this functionality is the LG Watch Sport, but expect to see this feature coming to many others, both new and old, in the future.

Moving to the bottom of the watch, the smooth matte plastic bottom that allows for conductive charging also aids in keeping it light on the wrist and cool to the touch after charging . Fortunately, steel makes up a large part of its build, so the use of plastic doesn’t detract from the premium look and feel.

Basically, the LG Watch Style is equal parts Pebble Time Round and Moto 360 2nd Gen in its design. LG and Google supplied TechRadar with a rose gold review unit, which stands apart from the current fleet of Android Wear smartwatches a little more clearly than the silver and black options.

The 42mm watch measures up at 42.3 x 45.7 x 10.79mm and comes with a cream colored leather band, but accepts any and all 18mm bands – including Google’s own Android Wear Mode bands, which are available in both leather and silicone.

Inside the box there’s a magnetic conductive charger and wall plug included – the Style can automatically orient its screen in landscape mode when on its side, so it makes a decent bed-side clock if you’re in a pinch.

Next Page Specs, performance and fitness