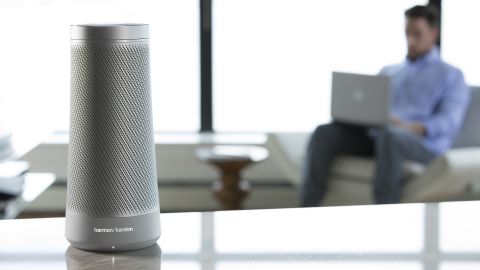 The Harman Kardon Invoke has a certain audience in mind: Windows power-users looking for a smart speaker they can call their own. Should you eschew Windows services such as Skype, Outlook and Office 365, however, you’ll find a barebones smart speaker that just can’t match its peers, the Google Home and Amazon Echo.

When the AI-equipped smart speaker was introduced to the wider world by Amazon in 2015 it was a novel idea – not only was the original Amazon Echo a Bluetooth speaker that could play nearly any song you could think of, it was a pretty handy smart home hub too.

Fast-forward just three years to 2017 and the market is nearly saturated with such devices. Not only do we have Google and Amazon producing a combined 10 models of smart speakers on their own, they’ve even started to license the technology out to third-party manufacturers like Sonos, GE and others who are making their own smart assistant-equipped sound canisters or packing the AI into unfitting form factors.

And now, just when you think the market doesn't have room for another speaker, here comes the $199 Harman Kardon Invoke, a US-only smart speaker so close in form and function to the Amazon Echo that they could be mistaken for one another by anyone unfamiliar with the slew of devices on the market right now.

So what actually separates the Invoke from the growing horde of smart speakers? Cortana, Microsoft’s answer to Siri and Alexa that is – unfortunately – a bit worse than either of the above.

Before we jump into why Cortana is just Alexa with a different voice, let’s cover the personal assistant’s home away from home - the Harman Kardon Invoke speaker. The Invoke is the first housing for Cortana that isn’t an Xbox One or Windows 10 PC and, all things considered, it’s a relatively fitting home.

In more or less words, the Invoke is a well-designed, great-looking speaker that has the audio firepower to deliver decent-sounding music. It’s a bit taller than the portly, air freshener-shaped Google Home, and a bit wider at the base than the Amazon Echo.

Inside the canister, you’ll find three direct-radiating woofers, two passive radiators and seven far-field microphones that help pick up your voice over the sound of the tunes. If that seven number sounds familiar, it’s because it’s the number Amazon uses in its Amazon Echo.

As for the passive radiators and direct-radiating woofers, it’s a similar setup to what we’ve seen in other smart speakers (Google Home has two drivers and two woofers, for example) but the Invoke handles music with a bit more care and tact than either the Home or Echo.

The speakers are encased in a black or silver shell with metallic accents and a grey grille. Along the bottom of the shell you’ll find Harman Kardon’s logo, and stretching across the middle is the speaker grille. On top are the touch capacitive control pad, blue LED indicators (when you summon Cortana, the top pad lights up blue, letting you know you have the AI’s attention) and the top ring of the speaker can be twisted right or left to raise or lower the volume.

Finally, underneath you’ll find a power port and microUSB port that’s reserved for servicing the device.

Overall we found the speaker’s design to be sleek and modern, an all-around great blend of form and function. The Invoke can’t connect to other stereo speakers via a 3.5mm auxiliary cable like the Amazon Echo Dot or Google Home Mini, but its fairly decent sound makes up for it.

For your average listening session - say, some light jazz while cooking dinner or rock music in the background of a board game night - the Invoke does an exceptional job.

To that point, at normal listening levels the speaker sounds crisp, detailed and warm. The bass is easy on the ears and neighbor-friendly. Turn it up past halfway, however, and the speaker quickly loses its way.

At higher volumes the speaker crackles and distorts. Bass lines like the one in Vance Joy’s The Fire and The Flood overwhelm the speaker, as it loses fidelity. Mids and highs shift from warm and cushiony to violent tempests of sound as they crash tumultuously into one another.

Worse, besides not always being the best-sounding Bluetooth speaker on the market, the Invoke is also one of the least well-connected ones. In total, the Invoke can only connect to three music services: iHeartRadio, Spotify and TuneIn. (Pandora has been promised by Microsoft, but it's not here yet.)

Amazon Echo has Spotify and iHeartRadio plus Amazon Music Unlimited and Pandora, while Google Home has Spotify, Pandora, Google Play Music and YouTube Music, which allows you stream any song from any YouTube video.

Compared to Google Home or Amazon Echo, the Invoke just doesn’t have a comparable music library, which might be more forgivable if the speaker itself was bulletproof - but frankly, it’s not.

Cortana as a personal assistant

While the Invoke can’t measure up to its predecessors in terms of connectivity, at least Cortana is almost on par with Alexa and Google Assistant: Cortana can tell you about the weather or the news without a problem, set timed reminders and, for those hooked into Microsoft’s services, scan your email for flight information and check your calendar.

If you’re tied into Microsoft’s services (Skype, Outlook or use Sticky Notes on a Windows 10 PC), you’ll find that Cortana has a lot of wonderful tricks up its sleeve. Move from your living room to your office, and the notes and reminders you set on your Invoke at home will follow. Use Skype as your primary voice calling app, and the Invoke can replace your home phone.

But if you shun Microsoft services - you use Gmail over Outlook, Google Docs over Office 365 or Google Chat over Skype - the Invoke becomes decidedly less helpful. No longer does it know what’s happening on your calendar nor can it place calls for you. (Unlike the Google Home which lets you just spout off a number to a landline or cell phone to place a call, Cortana requires a Skype contact name before it completes the call.)

But calling, for most folks, isn’t a deal-breaker. But it's not like Cortana makes up for this major blemish in other areas with a secret, proprietary feature of its own - it doesn’t. In terms of general knowledge Cortana knows its stuff, but delve into anything specific and Cortana often delivers the wrong answer.

Say you want to know when the new Call of Duty is going to come out. You ask Cortana, “Hey, when does Call of Duty WWII come out?” Cortana thinks about it and will reply with “Call of Duty World at War was released on Nov. 11 2008.”

Some games work better than others (Cortana knew when Super Mario Odyssey is coming out, for example) but by and large the response from Cortana in this area is typically incorrect.

Now, we realize we’re hitting on something oddly specific here, and when it comes to general knowledge inquiries Cortana does just fine. To that end, sure Cortana can tell you the cruising speed of a Boeing 747 and what year the Parliament of England was founded, for example, but don’t expect it to win trivia night against Google Assistant anytime soon.

The Invoke as a smart home hub

The last piece of the puzzle for smart home speakers is, well, being a smart home hub - the Amazon Echo and Google Home perform relatively similar in this category, and thankfully so does the Harman Kardon Invoke.

Like the Home and the Echo, you’ll see many of the same products available to sync up here. Namely, that includes the Samsung SmartThings platform, Wink, Insteon, Nest and Philips Hue lights.

It’s largely the same offering between the three main smart home hubs - the Home, the Echo and now the Invoke - although one missing component is TV integration. The Home can connect to Google Chromecast devices, while the Echo has Alexa TVs. So far, no TV manufacturer has signed on for Cortana integration, which is a little disappointing. As far as we know, there’s not even a way for Cortana to control the Xbox One yet.

Beyond what’s already available, Microsoft has said that it’s working with Honeywell, Ecobee, TP-Link, Johnson Controls, IFTT, Geeni, Iris by Lowe’s, and iDevices to add support for those products and services in Cortana, but none of them are available right now.

It’s hard to dislike the Harman Kardon Invoke. It's just hard to favor it above all the other options out there. It’s not as feature-rich or well-stocked as the Google Home or Amazon Echo, but it sounds pleasant at lower volume levels. It might not be able to connect to any external speakers or have the same breadth of smart home devices that Amazon or Google have, but neither of those facts are deal breakers.

At its best, the Harman Kardon Invoke is a decent-sounding smart speaker targeted at Microsoft power users. It has its flaws and gaps in performance, but it never falls flat on its face in any one category.

The Invoke feels incomplete in its current form. While the Echo and the Home have begun their second stages of life as fully realized intelligent assistants, the Invoke is stuck as a smart speaker - and a fairly limited one at that.

If it were less expensive, the Invoke would be an easy sell to a certain type of shopper. (“Need a smart home speaker to go with your new Windows 10 PC? Try the Invoke!”) But as a $199 rival to the Amazon Echo and Google Home, it just doesn’t fit the bill as the best smart speaker on the market.

While neither the Home and Echo sound quite as rich as the Invoke at lower volumes, both speakers are better equipped with streaming services and are in better positions to rule your smart home thanks to existing partnerships.

In a vacuum or having been released alongside the Echo in 2015, the Invoke would be an interesting, unique product that might be worth the investment. But, here in 2017, your money is better saved by choosing one of the more popular smart speakers.