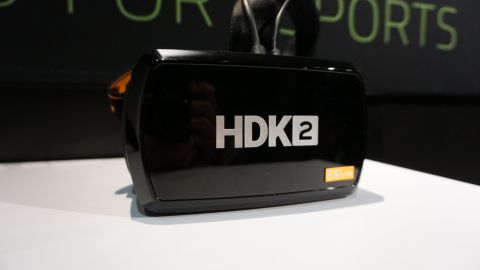 Is open source the future of virtual reality? Razer thinks so

Razer's first entry into virtual reality seems more promising on the software side, though making everything open source may bring problems of its own.

The Razer Open Source Virtual Reality (OSVR) Headset has its heart in the right spot.

As its name implies, it wants to extend the open source nature of the PC to the virtual reality space, allowing both creators and consumers a single spot to play every VR title.

The second iteration, unveiled for the first time at E3 2016, addresses many of the problems of the original dev kit: instead of one single screen, there's now two OLED screens that give the OSVR a 2160 x 1200 resolution, and it has a higher refresh rate that makes it more comparable to the Oculus Rift and HTC Vive.

But while the latest iteration takes one step closer to the VR systems it embraces with open arms, its full potential remains largely untapped by developers.

To that end, Razer has created a $5 million fund to help support developers who choose OSVR and are willing to collaborate with Razer on bringing more content to its platform.

As it currently stands, however, OSVR has a plethora of titles at its disposal including AAA games from the HTC Vive's library to emulators to games created exclusively for the headset using Razer's SDK.

There's limitations here, obviously, but by and large OSVR is on its way to accomplishing the lofty goal it set out for itself when it first launched back in June of last year.

The best way to describe OSVR is if you took a Samsung Gear VR and crossed it with an HTC Vive. It's weightier than the former, but not quite as comfortable or as sturdy as the latter.

Two elastic straps loop around the sides of your head, while one bisects your head and holds the headset level.

It's a system we've seen before and practically every headset before the OSVR – but Razer isn't out to reinvent the wheel.

When tightened up the straps form a tight seal that culminate in a little pressure on the nose. When properly fit it's a bit snug, but that's better than the alternative.

One downside of the tight fit is that those of us burdened by poor eyesight are better off not wearing our spectacles in VR – it's just a bit too tight of a fit to have glasses on and have the lenses focus for the optimal experience.

Inside the headset are the two 1080 x 1200 resolution screens that have a 110-degree field of view and a much-improved 90Hz refresh rate, and a diopter that allows you to bring the lenses closer or move them further away depending on how bad your vision is.

Overall the OSVR isn't quite as comfortable to wear as the HTC Vive or Oculus Rift, but little by little Razer is getting it there.

When asked what hardware would work best with the headset, Razer's Jeevan Aurol, OSVR's Product Manager, pointed to the specs put out by Oculus and HTC: namely, an Intel Core i5-4590K and either a Nvidia GTX 970 or AMD R9 390 GPU.

Unfortunately, however, because some software isn't designed to integrate perfectly with the OSVR some titles might feel better than others.

In one demo I noticed a fair amount of judder when moving my head back and forth, while in another things were more or less fine.

That's ultimately the biggest problem the OSVR will face – because experiences are cobbled together from a variety of sources, there's very little quality control for the games you're playing.

Setting aside the semi-potluck style of serving content from developers who can bring any game they want to the platform, the OSVR isn't quite able to replicate the experience of playing native HTC Vive titles.

Like the Oculus Rift, the OSVR only uses one camera instead of a sensor array. That means, unless you're standing straight in front of it, tracking is going to be less than ideal.

The other major hurdle is that OSVR currently lacks a pair of touch controllers. Razer has partnered with Leap Motion and Manus to remedy that problem with a pretty svelte pair of gloves, but integration isn't as natural or as fluid as using controllers designed in-house.

The OSVR headset really can't be fairly compared as competitor to the Oculus Rift or the HTC Vive just yet, or perhaps even at all. The device is uniquely Razer in that it's attempting to make VR an open platform for anyone to create their own VR hardware - similar to the concept of last year's modular PC, Project Christine. People then can do whatever they want with the end result, including sell their creations.

I don't know whether future iterations of the OSVR headset will have long legs, but I can see the potential due to its modular capabilities. The silver lining may lie more in the OSVR software platform. The ability to come together and agree to share various software and hardware technologies to build a feasible VR experience simply has been lacking.

With Razer's rabid, supportive fanbase that seem eager to see where OSVR will end up, and with the space still growing, it doesn't hurt to see another company throw its hat into the ring. Regardless of what happens, I'd like to see the next version of the Hacker SDK and the evolution of the OSVR platform as a whole before I decide whether to buy one for myself.

Lily Prasuethsut contributed to this review