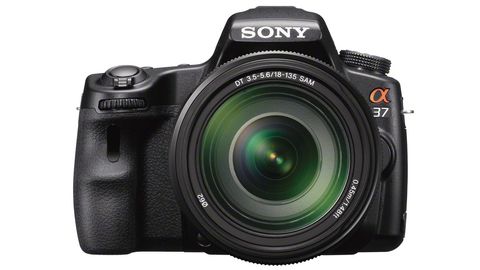 Sony's Alpha a37 is the latest camera to arrive in the company's entry-level DSLT lineup.

Sony's DSLT (or Single Lens Translucent) cameras incorporate Translucent Mirror Technology, and a semi-transparent mirror enables light to be split between the CMOS sensor and the separate AF sensor.

The benefits of this are speedy, full-time phase-detection autofocus and fast continuous shooting rates, because there's no mirror movement to slow things down.

Having been around for a little while, Sony's concept is quite well bedded-in now, and it's beginning to have an impact on consumers looking to purchase their first interchangeable lens camera.

A number of improvements have been made to the Sony a37, when compared with its Sony Alpha 35 predecessor.

A tiltable screen is available on the Sony Alpha 37, alongside the 100 per cent field of view electronic viewfinder.

Auto portrait framing, a feature first debuted in the Sony a57, is now included in the entry-level range. This works by cropping an image in post-production to give what the camera considers to be a better composition. The original image is also saved, should you wish to make your own crop.

Clear Zoom technology is also included. This is a form of digital zoom, but Sony promises that By Pixel Resolution technology keeps image quality at a premium and maintains image size.

In terms of aesthetic changes, there is little to talk about - although minor ergonomic changes see a slightly redesigned handgrip and repositioning of some key buttons.