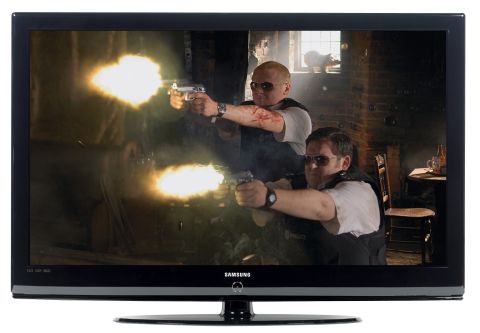 Samsung's debut 1080p LCD TV, the LE40F71, looked great, was reasonably priced, and, sometimes, its pictures rocked. But there were too many performance inconsistencies for my liking, and the lack of a digital tuner didn't exactly float the forward-thinking boat.

Connectivity is excellent. There are three HDMIs, a component video input, Scarts, a VGA PC port, an optical audio output for forwarding multichannel digital audio tracks received via HDMI to an AV receiver, and all your basic AV stalwarts.

The HDMIs add three very key features to the TV. First, they can receive the full range of 1080p signals: 50/60Hz, and 24fps/48Hz. Second, they are fully compliant with the 'CEC' standard for digital communication between different attached devices.

Theoretically, you can attach the LE52M86BD via HDMI to any CEC-compliant device, such as a DVD player, and access most of that DVD player's features via the TV's remote.

Last but not least, all HDMIs are v1.3, making this one of the first TVs we've seen able to deliver HDMI v1.3 benefits such as the 'Deep Colour' feature for extra colour range, and lip-sync correction.

The TV is a doddle to use. Attractive onscreen menus are stuffed with options: a dynamic contrast facility allows the backlight to automatically reduce its output during dark scenes; Samsung's Digital Natural Image video processing tweaks colours, black level, motion and detailing; Movie Plus delivers enhanced 3:2 pull down in movie-viewing to reduce motion problems. Support is also on hand for the source-dependent xvYCC higher-grade colour specification offered by HDMI v1.3.

The LE52M86BD claims a whopping contrast ratio of 15000:1, which is certainly a very impressive-sounding number. That is, however, 'somewhat' optimistic, (our labs measured it at a real-world 645:1). Even so, during the opening scenes of Star Wars: The Revenge of the Sith, the LE52M86BD exhibits a deep and profound black level. This gives its images a sense of dynamism and scale, which befits the screen's epic size.

Samsung's LCDs have long been praised for the vitality of their colours, and that remains the case here. Out of the box, hues are somewhat cold/blue, but after calibration we hit a nigh-on perfect 6500k balance. Very impressive.

This screen can also deliver some spectacular fine detailing. However, clarity dips with motion.

The picture will look rather noisy if you're too aggressive with the contrast and/or brightness settings, so we found it best to keep them as low as possible without the picture becoming flat. The LE52M86BD's Movie Plus option does improve this situation somewhat, though it also creates problems of its own, such as the occasional appearance of shimmering around the edges of moving objects.

The screen's slight troubles with motion effectively means it doesn't deliver a significant difference between 1080i and 1080p. But then this refinement is marginal at best.

A fairly key flaw of the brand's 2006 LCD range was thin and uninvolving audio. The LE52M86BD improves in this department. It's still not got the bass or body to rival speaker/amplifier combinations, but it is good enough to at least involve you in what you're watching.

Overall, this is a superior large-screen panel. From a design point of view, it's another triumph for the brand, and technically it shines too. My reservations about its motion resolution should not dissuade you from an audition.