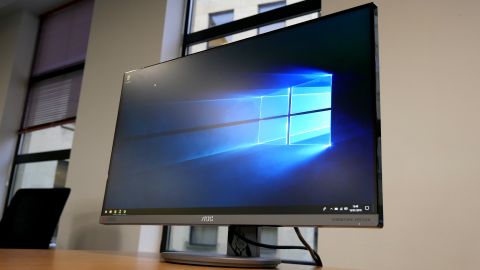 Really serious about something? Then you need specialist hardware. That’s definitely true for PC gaming and it particularly applies to PC monitors. Of course, the more specialised your PC monitor, the more you may have to give up in general usage terms.

In fact, that ‘G2’ suffix refers to G2 Esports, a multi-team esports organisation based in Berlin that now works in partnership with AOC and uses AOC gaming displays at its training facilities.

Anyway, the consequence of that gaming-centric focus is a basic form factor that won’t set your pants on fire, not in this age of uber-wide aspect ratios and ultra-high 4K-plus resolutions. We’re talking a modest 25-inch diagonal size and a mere 1080p or 1,920 by 1,080-pixel native resolution. Indeed, the G2590PX G2 doesn’t even have what would normally be termed a high quality IPS or VA panel, AOC opting here for TN panel tech.

Instead, what this screen does deliver is everything you need for quick responses and smooth visuals in games. In other words, high refresh rates (144Hz here), low input lag and adaptive frame synching, among other features. That’s the theory, at least. Time to find out whether this screen delivers in practice.

That’s very much in the anticipated ballpark for this class of 25-inch gaming monitor. In fact, it’s a little cheaper than BenQ’s Zowie XL2540, though that screen offers an even higher 240Hz refresh.

It’s worth noting that you do give up quite a bit in terms of general-use monitor specifications in return for the gaming props. At this price point, you could just about stretch to a 40-inch 4K TV with an HDMI 2.0 input. Certainly a 27-inch 1440p monitor would be in range. But those options have significant downsides for gaming.

Aesthetically, the new AOC G2590PX G2 is a pretty smooth operator. You get slim bezels on three sides of the panel, cool grey highlighting and some G2 Esports graphics that add a little character without being overly adolescent.

The stand clips neatly into the back of the screen and is adjustable for height, tilt and rotation. It provides a nice, sturdy base and also a handy hoop for cable management. It all feels quite high quality.

The key input options are covered, too, courtesy of dual HDMI inputs and a DisplayPort socket. Granted there’s no USB Type-C connectivity, but then hooking up an ultrabook laptop is not exactly the standard usage model for esports.

But what about those gaming features? For starters, you get 144Hz refresh. Then there’s support for AMD FreeSync. That used to be locked to AMD graphics cards. But at CES, Nvidia announced it was unlocking its GPUs to enable support for FreeSync, making the feature much more appealing.

Elsewhere, the OSD menu reveals a wealth of gaming options. Many of them, such as the preset color modes for various modes of gaming including RTS or first-person shooters, are arguably of little value.

Not so the low input lag mode and multi-stage overdrive option. The latter allows you to choose just how hard to push the pixels in terms of response. The most aggressive setting does some very odd things to image quality, but the medium option is a nice compromise, more on which in a moment.

The OSD, incidentally, is controlled by a single joystick input. It’s a tidy solution, but can be confusing to use.

In static image quality terms, you’d have to class the AOC G2590PX G2 as moderate going on mediocre. Out of the box at default settings, the colors are very washed out.

A quick tweak of the gamma setting solves that problem, the net result being decently saturated visuals and acceptable contrast. You won’t mistake this for a quality IPS panel, let alone a new fangled HDR monitor, though.

Partly that’s thanks to typically poor viewing angles from the TN technology used in this panel. There’s evidence on compression in white tones, too. But, overall, the color balance is reasonable and, critically, there’s plenty of detail in black scale test images. That matters because it means you’ll be able to make out objects and details in shadows and dark scenes when gaming.

Of course, with a 1080p native resolution and a 25-inch panel size (24.5-inch, strictly speaking), the AOC G2590PX G2’s has big, fat pixels by today’s standards. It works out to a DPI of just 90, where even a basic smartphone now offers a DPI beyond 300. On the desktop you really notice that in terms of things like font rendering, which looks pretty rough and ready.

In games, however, it’s a totally different story. The relatively low resolution enables your graphics card to pump out many more frames per second and in turn make the most of that 144Hz refresh.

Granted, higher refresh rates are available. But there aren’t all that many GPU-and-game-title combos that truly allow you to make the most of, say, a 240Hz monitor. And in any case, 144Hz makes for a very slick and responsive experience.

Combined with the low input lag mode and the pixel overdrive set to medium, the overall upshot is a very snappy gaming experience indeed. For the record, AOC claims response times of just 1ms.

Again, the overall look and feel of the screen falls short of the latest HDR panels for sheer wow factor and vibrancy. But it’s a reasonably punchy display of its type and certainly offers plenty of shadow detail.

Less impressive are the built-in speakers, which sound about as good as a pair of in-ear headphones rattling around a table top. But then they’re more a backup feature for when your normal sound solution is unavailable, rather than a serious attempt to provide immersive audio.

A monitor like the AOC G2590PX G2 is easy to rule out for most PC users. It makes too many compromises in areas like size, resolution and static panel quality. You can get bigger, sharper, better looking monitors for the money.

What such alternatives can’t do is nail the gaming experience like this screen. The G2590PX G2 has a really nice combination of gaming features, including 144Hz refresh, frame syncing and fast response, at a reasonable price.