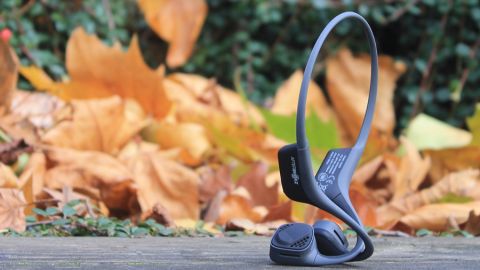 Great around the office, the gym and out on a run, these bone conduction earphones that sit outside the ear are so comfortable you forget you're wearing them. However, sound quality is not as good as from regular headphones.

Do you exercise or commute in magnificent isolation? Blocking-out ambient noise is the best way to immerse yourself in your music. If you're working out in a gym then that's all fine, but if you're out on a run in an urban environment, or commuting through busy streets and stations, you do actually need to hear those cars and other people around you to avoid collisions.

Cue open-ear running headphones like the Trekz Air, which do away not only with noise isolation, but with intrusive earbuds altogether.

While most manufacturers persist with technology that stresses noise isolation and cancellation, AfterShokz has bucked the trend by promoting situational awareness, and it does it using bone conduction.

The Trekz Air are a pair of wireless headphones that wrap around the back of your neck and AfterShokz, their manufacturer, are keen to stress that the technology has come on a lot, and now doesn't mean sacrificing bass.

In our tests, that's mostly true, though with a proviso (see the Performance section, below).

Although they're aimed at 'elite and aspiring athletes' (aren't they always?), a price point of £149.99 (US$$149.95, AU$219) makes them affordable to anyone after a serious pair of headphones for general use. You might well buy these for running around city streets, but they're going to have to work a little harder than that for the money.

If the price is just too much, know that AfterShokz's debut, a slightly chunkier, less close-fitting attempt at bone conduction headphones, the Titanium, now sells for a more palatable £99.99 (US$$129.95, AU$149).

The key design feature of the Trekz Air is, of course, that they're not earphones at all, but speakers. AfterShokz calls this 'OpenFit', and despite them allowing you to hear what's going on around you, one of those small bone conduction transducers comes with a further safety option; a mute button. On the left-hand side and easy to find, it's designed for the user to press when, say, crossing a busy road.

Less neckbuds and more head-backbuds, the Trekz Air are strong, yet they flex. A lot. That's thanks to the use of a lot of titanium in their design, which allows them to be twisted and tugged a surprising amount.

It means they can be worn around the neck, shoved into a pocket or balanced on a hook, which is all useful stuff for a pair of headphones designed to be used when exercising. So too is their IP55-rated waterproof build.

They might be a unique proposition, but the Trekz Air are no heavyweight; they weigh a mere 30g. However, the soft silicon covering together with the careful positioning of the electronics means that the Trekz Air tend to stay in one place, however active. In fact, they barely move whatever it is you're doing.

That's partly to do with the materials used and the weighting and positioning of the various components, but it's also got to do with where the speakers themselves sit on your head. At least on the face that we tested them on, the Trekz Air sat comfortably within a small dimple area at the top of the jawbone. It's a really subtle, careful, clever design.

As you might expect, it's also possible to take hands-free calls on the Trekz Air. For that particular feature, each speaker comes equipped with noise canceling microphones to lessen ambient noise during calls to make voices as clear as possible.

Set-up was easy, with a female voice called Audrey confirming that the Bluetooth pairing process with a phone had worked. Thanks, Audrey.

On each side of the Trekz Air there's a small fingertip-sized housing that contains batteries and controls, though they also have a role to play in keeping the Trekz Air still on the back of the head.

The controls are simple, too; on the right-hand side are volume buttons, which send a tone to the speakers with every press (and a higher-pitch tone when the maximum volume is reached). That's important because, as open-ear headphones, there is a risk of sound leakage.

We didn't actually think this was a major problem; people close to you can definitely hear what you're listening to if your music is at full volume, but only if you're in a very quiet environment. However, they're great around the office, where you can listen to music and and never fear that you'll miss a barked order from the boss.

So how do they sound? In a sentence; good enough for the gym or office, and much fuller than the AfterShokz Titanium, but not as good as a pair of regular headphones or earphones.

As well as testing them in the gym and on a run, we took them through a busy city centre and found that volume and bass levels really weren't high enough when in a scenario where there's lots of chatter, or in a blustery wind. Put the Trekz Air on full volume and you start to feel the vibrations in your jawbone, with the odd sensation of a slight tickle in your ears.

So it's probably best to avoid these for commuting, and keep them for the gym or a jog, where they will happily operate, tickle-free, on less than full volume.

One of our biggest gripes about the Trekz Air has to be its short battery life. Yes, we realise that it's lightweight design is to blame, and we're loathe to criticise that, but just six hours does put them in the dreaded 'day use' category.

We don't mind charging our smartphones overnight, but headphones also? No thanks. The saviour is a quick-charge mode that sees the Trekz Air recharge enough in just 15 minutes to get you through an hour in the gym.

That said, if you're just after the Aftershokz Trekz Air for fitness use, then the battery will be great and easily last a marathon for nearly everyone.

But many people don't want headphones for just one use any more - especially at this price -and if that's you, then you might find the battery life a little short .

Most exercise-centric headphones that claim to block-out noise create an odd effect that is never on their features list; they feed into your ears the vibrations from your feet as they hit the ground.

By avoiding your ears, the Trekz Air don't do that at all, while still delivering decent sound quality. They also have a great fit; stable and steady, they don't move much at all when out running. Kudos to the designers for the careful weighting, and precise positioning of the speakers and components. It's even possible to wear a baseball cap while wearing the Trekz Air without any overlap.

The Trekz Air lack the volume to cope in outdoor scenarios with lots of background noise, and the overall sound quality is not up there with regular headphones. Put them on full and there's also a weird ear-tickle to contend with.

Add to that the battery issues that people who want to use these more widely, and you'll see they're not perfect. However, both of these issues are natural limitations of the tech and design, so it's hard to castigate too hard for their lack of ability.

A lack of ultimate clarity in busy environments was always going to let down the Trekz Air; after all, its bone conduction speakers are really designed to do the opposite of most headphones that claim noise isolation or cancellation.

The slight 'tickle' of the ears will also put-off some, but let's stress one thing; the Trekz Air are superb in the gym, or if you're out on a run in the countryside.

Our biggest issue with the Trekz Air isn't the use of bone conduction, but its short battery life. However, that's caused by a clever lightweight design that's hard to resist, and which gives the Trekz Air a characteristic that's truly unique; they're so light and un-intrusive that it's easy to forget you're wearing them. And that, surely, is what true immersion in music is really all about.