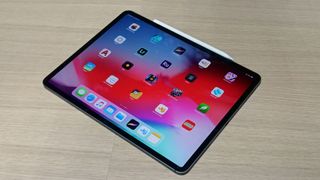 Back in November we started hearing reports that some of Apple’s latest iPads – the iPad Pro 11 and iPad Pro 12.9 (2018) - were exhibiting slight bends, either straight out of the box or after normal use. Now, Apple has responded to these claims, admitting that some devices are indeed bent, but saying this isn’t considered a defect.

Speaking to The Verge, the company said that some of its newest iPad Pros ship with a slight bend in the aluminium chassis as a result of a cooling process used in their construction. However, Apple claims that this shouldn’t negatively affect the performance of the slate or get any worse over time.

It seems you’re more likely to notice the issue if you have an LTE iPad Pro, as the bend is often visible at the plastic antenna strip, but there are reports of bends on Wi-Fi-only models too.

If your iPad Pro has such a bend then you should be able to return or replace it within the first 14 days, though it’s unknown whether Apple will let you swap it at no cost outside that window. Given that it’s not considered a manufacturing defect we’d imagine not.

It’s also not clear how widespread this issue actually is. The Verge claims that both its original iPad Pro 11 and a replacement one exhibited the bend.

But Apple for its part says that it hasn’t seen a higher than normal return rate for the slate so far, suggesting that there might not be a huge number of bent ones, or that people aren’t too bothered by the bend.

In any case, for now it doesn’t seem like this is anything close to as much of an issue as ‘bendgate’ was, but should it develop further we’ll be sure to let you know.