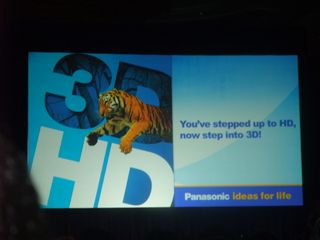 Tech companies are showing off thousands of brand new products at CES and it soon becomes apparent that many of them have certain things in common. Here are 10 great examples:

As expected, CES 2009 is awash with ultra-skinny TVs, although pure OLED sets are somewhat thinner (ahem) on the ground. Panasonic arguably has one of the best in shape of the 54-inch Z1, which measures just 25.4mm deep.The TV also packs Wireless HD technology and, of course, is 1080p capable.

Samsung's TVs are also pretty waif-like at around 25.4mm deep, but it's Panasonic that takes the Size Zero honours. Its prototype NeoPDP plasma measures just 8.8mm from front to back, even though the viewing area is actually 50-inches from corner to corner.

They've been kicking around for a couple of years as concepts, but the first pico projectors are finally becoming a reality at CES 2009. Pico projectors are tiny devices that can be incorporated into mobile phones and other gear, and then used to splash images onto walls, projector screens, etc.

They're going to be brilliant for business presentations and for watching movies on the move - although obviously if you lose your phone then the presentation, the projector and your dignity will disappear along with it.

Our best hope lies in devices like 3M's MPro projection engine, which really is slim enough to slot inside a phone. Team that with a smartphone equipped with a 2TB SDXC card and you simply won't need a massive telly or a Blu-ray player anymore. The Logic Boltcell phone concept would seem to fit the bill nicely.

If you thought internet access was limited to PCs and smartphones, then seeing some of the gadgets at CES 2009 could come as something of a shock.

Broadband internet access is now popping up in TVs, thanks to things like Yahoo's TV Widgets, which enables you to do things like grab personalised weather updates from the ether while watching EastEnders.

In what could be a last ditch effort to make Blu-ray popular beyond the PS3, the format's backers are unashamedly sticking drives in everything they can lay their hands on.

Sharp is putting a Blu-ray drive in its Sharp Aquos BD LCD TV, while JVC's LT-42B300 offers something similar.

Panasonic has even resorted to launching a portable Blu-ray player with a 9-inch display, something that seems like a complete waste of HD resolution. Better is the promise of Blu-ray 3D. You'll find more on 3D below.

As technologies go, 3D has been round the block more times than a marathon runner with a rocket up his arse. No one has yet found a compelling reason for anyone to actually want the technology - that is until now.

Panasonic has been showing off a 3D version of its 103-inch TV- complete with an endorsement by Hollywood director James Cameron - at CES 2009. It has also joined growing band of firms who plan on offering 3D movies on Blu-ray within the next couple of years.

Even Sony's getting in on the act showing off true 3D PlayStation game demos on its booth. The results are said to be 'amazing'. Samsung has also come up with a 22-inch 3D monitor for gamers, called the 2233RZ. Mitsubishi's entire line of Home Theatre TVs are also capable of displaying 3D content, thanks to a tie-up with Nvidia.