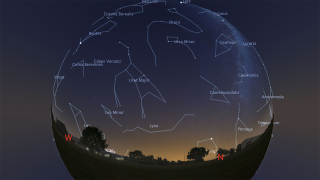 If there's one thing that astronomers hate more than anything, it's cloudy skies. Even in the most light-polluted cities on Earth it's possible to pick out a star or two on a clear night, but when it's cloudy there's no chance.

That's why astronomers from the Royal Observatory in Edinburgh have developed a mash-up of virtual reality and planetarium software that can deliver a cloud-free experience for stargazers, whatever the weather. It's called StarSightVR.

'Some people are also simply unable to come to places like the Royal Observatory or to travel to dark skies," said Alastair Bruce, the leader of the project. "So this technology could help them enjoy astronomy in a way that until now wasn't possible."

The experience is not unlike sitting in a planetarium, but with the benefit that you're running the show yourself. You can pump up the brightness of fainter stars, zoom into deep sky objects, or even entirely remove the horizon so you feel like you're floating in space. An open-source beta version is due to be released online "very soon".

With additional funding, Bruce hopes that the system could be used to run monthly presenter-led stargazing groups over the web - allowing an expert to guide people around the night sky, showing off the most interesting sights.

"I have always loved showing the stars to people" said Bruce, "but now I can guarantee perfect cloudless skies, and show the universe to people all round the world, while they stay in the comfort of their own homes."