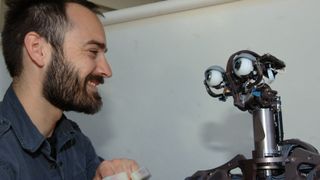 Dyson is betting big on future robots, giving the Imperial College London £5 million, or about AU$9 million, to create a robotics lab and develop the mechanical assistants of the future.

Rather than just automated vacuum cleaners or a Rube Goldberg series of interlinked triggers that conspire to get you out of bed and into your clothes eating toast before you've really woken up, Dyson is interested in robots that can "see" their surroundings and "think" like a person.

We're not talking sentient robots that will rise up to crush the human race either, though - at least, we hope not - just robots that are able to interact with the world as it changes around them.

James Dyson explains, "My generation believed the world would be overrun by robots by the year 2014. We now have the mechanical and electronic capabilities, but robots still lack understanding - seeing and thinking in the way we do.

"Mastering this will make our lives easier and lead to previously unthinkable technologies."

There'll be 15 scientists manning the Dyson Robotics Lab, with Professor Andrew Davison directing the charge. He says that the team will focus on creating "systems that allow machines to both understand and perceive their surroundings - using vision to achieve it."