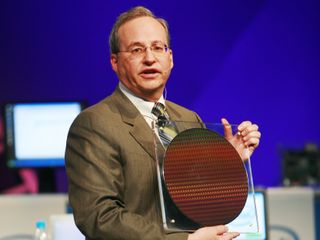 The world's worst kept secret was finally unveiled yesterday when Intel announced its new 45nm family of Core 2 PC processors. The new chips are based on Intel's existing Core 2 architecture, and our tests showed they radically boost power efficiency as well as delivering improved performance.

It's not an understatement to say that everybody is impressed. Here's a sampling:

"The launch of Penryn is notable in that it's the first 45nm PC processor as well as the first CPU to sport High-K metal gate technology," said Ian Robson, editor of PC Plus.

"It gives you another step up in desktop platform performance and our PC Plus labs tests measured a 60 Watt reduction in like-for-like desktop system power consumption. Intel is proving itself to be an unstoppable force in processor design, with AMD trailing further and further behind," Robson added.

"We can't help but think the new Core 2 Extreme QX9650 is but a glimpse of what Intel has in store for us in the future," Hot Hardware wrote. "Intel has been talking about its 45nm process technology for what seems like an eternity.

Hexus also picked up on the improved speed/reduced power usage points. "A number of evolutionary architectural improvements gives the 45nm processor an up-to 10 per cent performance lead over an equivalently-clocked 65nm (QX6850) part," went the review. "That good news is compounded by the fact it also draws, somewhat oxymoronically, considerably less power when doing so."

Hexus did have some gripes about the new Penryn chips. "Intel could easily have released the Core 2 Extreme at 3.2GHz+. The architectural bolt-ons don't provide significant increase in performance when evaluated on a clock-for-clock basis and in a desktop environment."

And in conclusion: "The Core 2 Extreme QX9650 is priced at exorbitant levels [around £650 in the UK] that are in keeping with a company that has no competition at the very high end of the consumer market.

The new Penryn chips received a 10/10 mark for performance over at Bit-tech.net. "We think it's fair to say that Intel's Penryn architecture can be regarded as a success, as it offers some decent performance enhancements over existing processors, while using much less power in the process.

"Specifically, the Core 2 Extreme QX9650 is of course a processor that everyone would love to own, but very few will have the money or need for it. Most of us will want to wait for the mainstream dual- and quad-core 45nm CPUs to arrive, but the Extreme Edition has never been about volume. It's about a technological demonstration that creates a halo effect to help sell the more mainstream-orientated products.