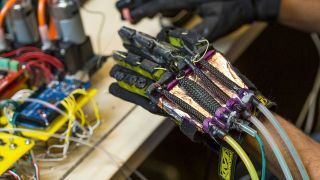 When it comes to next-gen virtual reality, such as a HTC Vive 2 or Oculus Rift 2, much of the emphasis sits with the quality of the display technology set to feature. But that's only one part of the immersive VR equation, as engineers at UC San Diego are looking to prove.

The team has developed a pair of light gloves that use 'soft robotics' to allow their wearer to realistically feel tactile feedback when touching objects in virtual worlds.

The gloves use a component called a McKibben muscle, which uses a series of latex chambers covered with braided muscles to stimulate sensations in the wearer's fingers. Connected to a circuit board, these 'muscles' inflate and deflate to replicate the pressure your digits feel when they press against a surface. Paired with a Leap Motion sensor, they're accurate enough to allow you to play a piano in VR.

“This is a first prototype but it is surprisingly effective,” said Michael Tolley, the mechanical engineering professor at the Jacobs School of Engineering at UC San Diego who worked on the project.

"Our final goal is to create a device that provides a richer experience in VR [...] But you could imagine it being used for surgery and video games, among other applications.”

While it's far from being a commercially viable product, the team 3D-printed a soft glove exoskeleton mold to prove its potential for mass production.

It's the sort of VR-interfacing tool that'd set a headset apart from the competition. With motion tracking pretty much mastered by all the major VR headset manufacturers, and display technologies consistently improving, a satisfying VR control scheme is a major missing piece of the puzzle. Buying a VR headset that bundled in gloves allowing for a tactile, natural interaction with the digital world would up the immersion factor exponentially.