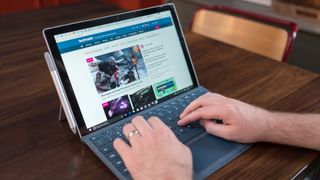 If you’re one of the many newly-minted Surface Pro owners that sees your shiny new tablet take impromptu naps from time to time, rest assured that Microsoft is on the case.

However, a cure to the latest Surface Pro’s sleeping problem is going to take a little while, as the fix that Microsoft is working on was not included in the firm’s Patch Tuesday updates for the week of July 9. Whatever fix Microsoft has in store needs more testing before it rolls out.

“Just wanted to provide additional information that this fix was not included in the 7/11 Windows update, as testing still continues,” Microsoft forum moderator known as ‘BryanH’ wrote recently in a lengthy thread. “I will update this posting when the update is available, also the Surface Pro Update History page will also be updated with the details when it launches.”

If you, like us, aren’t experiencing this problem with your Surface Pro unit, then you likely haven’t paid much mind to the countless Reddit and Microsoft forum threads populated with complaints of the issue. Specifically, many Surface Pro units since launch will randomly enter a sleeping state, at times losing place of users’ work – not a good look for a flagship productivity tablet.

That said, this is not the first time a Surface device has struggled with narcolepsy. Both the Surface Pro 4 and original Surface Book suffered from this problem at launch, with the issue having persisted for months before finally receiving a fix.

Here’s to hoping that the time between BryanH’s July 12 forum update and the implementation of this fix will come in days or weeks rather than months. Otherwise, the new Surface Pro is the most impressive Microsoft tablet we’ve reviewed to date.