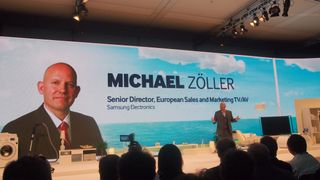 Samsung makes more than just Galaxy devices, you know. In Europe last year, four out of every 10 TVs sold in Europe were made by Samsung.

IFA is traditionally a home entertainment show and, in its second press conference in 12 hours, the Korean masters of tech promised to discuss this part of its business.

The event, packed to the rafters with hundreds of sweaty hacks from all over the world, was oversubscribed despite the main event already having been held last night. Many didn't get in and had to watch live streams outside. What exciting products would be uncovered?

"The future is curved," proclaimed Michael Zoller, Samsung's senior director of sales and marketing, to those lucky enough to make it inside. He was pointing triumphantly at the brand's curved OLED TV, announced earlier this year.

"It's the greatest TV of all time" he said.

But despite the future being curved, the most (only?) interesting new product announced at Samsung's consumer tech press conference was a 4K OLED TV prototype.

And get this: it's not curved. It's very much flatter than 11th Century Earth.

Not that we'd complain – we don't think curved TVs are a good idea at all. And of course Samsung is not the first tech brand to show off 4K OLED tech – Sony and Panasonic did so last year as they promised organic printing manufacturing process.

But we like the direction we're going with this tech. OLED TVs are still super pricey and remain out of reach of most people, but it's looking as though by the time that changes, Ultra HD will be part of the package.

And that's exciting for anyone wondering when to next upgrade - it gives you something to hold out for. Two new technologies for the price of one.

It's certainly more exciting than the Samsung press conference itself, which rewarded the attending hordes of cooked-alive journalists with precisely no news whatsoever.