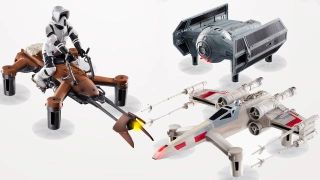 If you've got a fair few Galactic Credits spare, a new fleet of super-speedy Star Wars fliers may be the drones you're looking for this Christmas.

First revealed back at this summer's European Star Wars celebration, Propel's new series of remote control Star Wars drones are now up for pre-order on Firebox - in the UK at least.

And they cost a pretty penny. Each is priced at £229.99 (about $280, or AU$370), but they're packed with enough cool features to warrant hiring Boba Fett himself to track them down.

Fastest hunk of junk in the galaxy

First off, the three designs - Speeder Bike, X-Wing, and Vader's TIE Advanced X1 fighter- are meticulously detailed, as far as drones go at least. Clear plastic propellers sit on the underside of each ship, pushing them up into the air without obscuring the drone chassis itself, giving you a clear look at the craft in flight.

Then, there's the speed these things hit. Maxing out at 35mph, they'll rocket around wherever you take them for a spin. And averaging out at around a foot in length (or width, depending on the design) you'll be glad to have a physical remote to control them in the box.

The drones also allow for aerial dogfights with as many as 24 other drones in the series. Three direct hits with a laser strike from an opposing Star Wars drone and the ships will (gently) crash land.

While we're waiting on worldwide shipping info (which has been promised), UK shoppers can expect their pre-ordered Star Wars drone to ship on November 24. A Millennium Falcon edition has also been slated for release - we'll keep you posted on its status wants it appears out of its hyperspace jump.