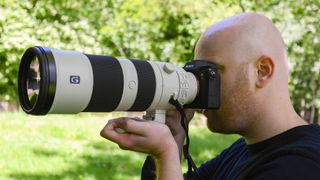 Sony's new beast of a telephoto lens, the FE 600mm f/4 GM OSS, might be getting a lot of attention, but it's the more affordable FE 200-600mm f/5.6-6.3 G OSS launched alongside it that will no doubt end up being adopted by more photographers.

While it lacks some of the fanciness of its G Master stablemate, it's almost a sixth of the price, but is still loaded with a slew of tech to keep the sports, wildlife and nature photographer happy.

Autofocus is handled by a Direct Drive SSM system, which Sony claims delivers fast and incredibly quiet autofocus, while a focus limit switch allows the user to close off focus to a range of 2.4-10m and 10m-infinity, whenever the full range isn't required.

The lens has also been furnished with three focus hold buttons, which can be customized to the user's preference, while internal focus and internal zoom mechanisms keep the length of the barrel constant at all times. Sony also points out that the lack of air suction during zooming also means the lens enjoys protection against dust and moisture.

While the broad focal range should satisfy most application, the optic can also be paired up with Sony's 1.4x and 2x teleconverters for extra reach. Using the former creates an effective 280-840mm f/8-9 option, while the latter doubles effective focal length to 400-1200mm and reduces maximum aperture to f/11-13.

Like the FE 600mm f/4 GM OSS, the lens is set to be released in September, although it will arrive with a £1,800 / $2,000 asking price that's easier to get along with – pricing for Australia is to be confirmed.