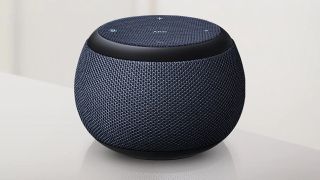 We've been waiting for a Samsung Galaxy Home release date for two years now, and after missing multiple release windows, the brand's first smart speaker could launch in a matter of weeks – or a version of it, at least.

We know this because Samsung published a press release for the new smart speaker, seemingly by accident, as it was removed very quickly afterwards.

Before this, Android Central translated the text from Korean, which tells us that we'll see the Samsung Galaxy Home Mini on February 12, one day after the company's Unpacked event, at which we're expecting to see the new Galaxy Buds Plus, alongside the Samsung Galaxy S20 phones.

The mini version of Samsung Galaxy Home speaker will reportedly launch in South Korea initially, costing 99,000 KRW (about $85 / £65 / AU$130). There's no word yet on when (and indeed if) the Galaxy Home Mini will launch in other markets – and based on the teething problems Samsung experienced with the original Galaxy Home speaker, we're not holding our breath for a speedy release.

A new competitor for Amazon and Google

Launching a Mini version of the Galaxy Home before releasing the long-awaited full-sized smart speaker is an unusual move from Samsung – but it's encouraging that Samsung is seemingly one step closer to finally launching its first smart speaker.

We saw the Galaxy Home Mini briefly at the Samsung Developer Conference in October, and it seems to have been developed with the now Samsung-owned AKG, which bodes well for the sound quality.

Samsung's translated press release reveals that the Galaxy Home Mini will come with AKG's "powerful 5W speakers", and is capable of providing 360-degree sound – although we'll need to test it for ourselves to make a true assessment of its performance.

Setting it apart from other smart speakers on the market is the Galaxy Home Mini's use of IR (Infrared) technology, which according to SamMobile, means that "any non-smart appliance that uses an infrared remote can be controlled using the smart speaker".

It's a clever feature that could appeal to those who want the convenience of using a smart speaker to control their gadgets, without having to pay for a whole host of compatible smart home devices.

According to Samsung's now deleted announcement, the Galaxy Home Mini will also allow you to make, receive, and send messages without connecting it to your smartphone.

Looks-wise, the Samsung Galaxy Home Mini is less striking than its yet-to-be-released sibling, which looks somewhat like a spaceship with its egg-shaped body standing on three metal legs. The Mini version does away with these legs, looking more like a smaller version of the Apple HomePod.

The Samsung Galaxy Home was initially set to launch in April 2019, but as that month came and went it became clear that the would-be rival to the Amazon Echo and the Google Home wouldn't be landing any time soon.

Since then, the Bixby-powered smart speaker has missed several more release windows, while Samsung's competitors at Amazon and Google have released all-new versions of their flagship speakers – whether the Samsung Galaxy Home and its Mini sibling will be able to compete with these established ranges when (and if) they're released, remains to be seen.