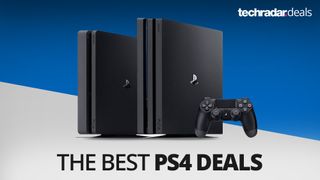 With the release of the PS4 Pro, Sony's fourth-generation console has seen some incredibly competitive prices in both bundles and standalone consoles.

Below you'll find all of the absolute cheapest standalone PS4 and PS4 Pro deals from Australian retailers, followed by our pick of what we think are the bundle deals that offer the best value, so you can dive straight into the wealth of amazing PlayStation 4 games on offer right now.

The PS4 is currently in a number of different forms. Directly below, you'll find the best deals for the PS4 and PS4 Slim (which is the original console in a smaller, quiter form).

Below that you'll also find the best prices around on the PlayStation 4 Pro console and any bundle deals available so you can score Sony's excellent 4K system and jump right into the amazing array of PS4 games available at the moment.

If you're looking for a decent price on a PS4 Slim, this offer from Amazon Australia nets you a white 500GB console with white controller for only AU$399.95.View Deal

Want a more classic-looking PS4 Slim in black? You're in luck, because from Amazon Australia also offers the darker 500GB console with black controller for the same price at AU$399.View Deal

Amazon Australia has a great deal on a standard 1TB PS4 bundled with the new Call of Duty: Modern Warfare game for just AU$458.95. Not the best price we've seen, but still a reasonably affordable way to get stuck into the best CoD game in years.
View Deal

The PS4 Slim is... slimmer, quieter and smaller

The new PS4 Slim effectively replaced the original PS4 when it launched in September 2016 for around $440 (500GB) or $510 (1TB). This smaller, lighter and more power efficient model also ends up being cheaper than the model it replaced, so there's little point looking out for the original model.

Check out the list below for up-to-date deals on the PS4 Slim.

However, as always the best deals come in the form of the bundles, so you should scroll further down this page as you may be able to nab one cheaper than a standalone console! The PS4 Slim is available in black or white.

Amazon Australia currently has the 1TB PS4 Pro console for AU$484 – which is AU$15 cheaper than it was last month, but we expect some decent offers to arrive soon enough. This offer is available the both the black and white version of the console.
View Deal

Although the PS4 Pro isn't a 'next-gen' console necessarily, it is an upgrade of the PS4 and features the coveted 4K and HDR options that we're hearing so much about.

The new machine will allow game developers to include 4K options in their games, so expect the like of Uncharted 4, Call of Duty: Infinite Warfare, Days Gone, Horizon: Zero Dawn and more to look even better on a 4K TV.

HDR, or High Dynamic Range is the other buzzword to be excited about as the PS4 Pro will allow for extra detail to be seen on a range of games and also a wider range of colours not usually displayed by traditional HD TVs.