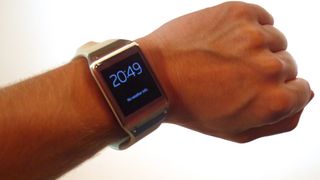 There's more in gear for the Galaxy smartwatch

Even if you thought the Galaxy Gear smartwatch looked fashionably acceptable when it was unveiled at IFA 2013 this week, chances are its high price point gave you sticker shock.

We noted in our Galaxy Gear review that the company's first smartwatch is going to be very expensive at $299 in the U.S. and likely £299 in the U.K. (around AU$325), potentially putting off a far number of wearers.

The good news is that Samsung is said to be planning a family of Galaxy Gear watches with a range of models to fit different customers' wrists, according to SlashGear.

That means you can expect a variety of new sizes, added and subtracted features and, most importantly, multiple price points.

Samsung explained that "Galaxy Gear" is supposed to be a sub-brand name akin to its Galaxy smartphone line, reported SlashGear.

The company is said to have gone through hundreds of different designs before it selected the look of the first Galaxy Gear smartwatch, which is set to launch in 149 countries starting on Sept. 25 and in the U.S. in October.

However, a variety of price points won't solve all of Samsung's hurdles in its attempt to be one of the first companies to launch a truly desirable smartwatch. Initially the device will only work for its Galaxy Note 3 phablet and Galaxy Note 10.1 2014 tablet.

That's a problem when, combined, the phone and Galaxy Gear will cost early adopters at least $500 (about £320, AU$545) up front, and customers still be on the hook for monthly contract payments for the smartphone. In fact, U.S. carrier Verizon is bundling the two for a pocket-punching$599.98.

Galaxy Gear will be compatible the Galaxy S4 smartphone when Samsung rolls out Android 4.3 with low-powered Bluetooth 4.0 in October, but when smartphone owners receive the update really depends on their carrier.