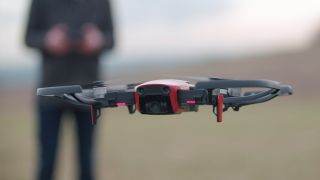 When you invest in a drone to take some stunning video footage from the skies, you agree to abide by certain rules – and that includes not adding weapons or fireworks to your autonomous flying machine, the FAA (Federal Aviation Administration) has warned.

The US agency has issued an update on the matter, seemingly prompted by the sharing of videos by people who've had their drones tricked out with all manner of dangerous equipment. A maximum fine of $25,000 is possible for those who break the rules.

"Do not consider attaching any items such as these to a drone because operating a drone with such an item may result in significant harm to a person and to your bank account."

The term "dangerous weapon" covers a lot of ground and extends to the use of fireworks as well as firearms, and more elaborate weapons like flamethrowers. Don't do it – it's not worth the YouTube hits.

Of course there's also the high chance of actually injuring someone with a weaponized drone, which then means you're in all sorts of other trouble with the law.

You also need to abide by the rules of wherever you're flying your drone too – the small aircraft are banned in a lot of parks and public spaces, for example.