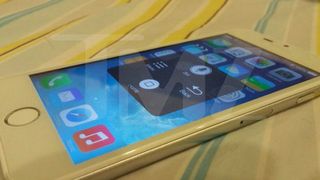 We've seen our fair share of iPhone 6 leaks over the last few months, but (as far as we can tell) they've all been dead units.

But today we're bringing you shots of a device that seems to be awake and running iOS 8. The source, TMZ, said it received the pictures from a source who swiped the phone from a Foxconn factory.

While we obviously can't confirm the validity beyond TMZ's word, the phone certainly fits with most of the leaks we've already seen. It's got the more rounded design in the edges, while the camera on the back looks to be slightly raised.

The raised camera is something we've heard about in earlier leaks, but we thought it might be changed come the phone's final release. If these latest shots are to be believed (and this isn't just an early prototype, which it might be) Apple's new camera may not be totally flush with the rest of the phone.

But the biggest thing here is the fact that the phone is running iOS 8, making it seem slightly more plausible that this is indeed the iPhone 6. However there's always a chance it's a good photoshop job, don't forget.

On the screen we can see the menu, which is blocking out some of the apps - possibly the Health app? TMZ's source said that the phone is "noticeably" lighter than its predecessor and includes a new sensor on the front.

From what we can tell, it looks like Apple has just moved the existing light sensor above the speaker grille and made it slightly bigger, but it's difficult to be sure just yet.