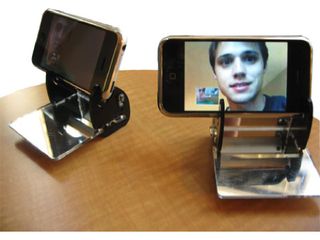 Apple's newest iPhone, believed to be debuting next month, will apparently be positioned as an industry-leading phone / camcorder alliance.

Sources speaking to Business Week have confirmed that a major focus of the new iPhone will be on video recording (no pun intended), and elements of iMovie will be ported to the iPhone OS to allow easy video editing.

The source claims that shooting video will be as easy as it is with Flip series of camcorders by Pure Digital, which are designed to be easy ways to quickly take footage on the go without carrying a bulky device with you.

Apple would certainly have to go some way to make this idea work, as it's going to need a pretty hefty battery, as well as some decent shrinkage of the innards, in order to preserve the glossy and slim iPhone image.

But the idea is that Apple will wander into another market late (think digital music, think mobile phones) and dominate once again by creating easy to use hardware with a raft of user options to play with, which super-easy uploads to the likes of YouTube.

It's been oft-documented that Apple likes to leave small flaws in its hardware so it has something to update... so it's likely that the 'fastest iPhone ever' will have a pretty decent upgrade to the frankly poor 2MP camera its currently carrying around.