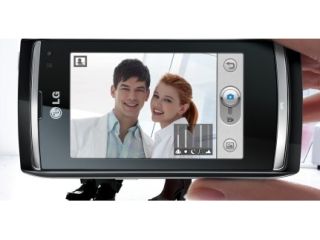 LG has announced its latest and thinnest 8MP cameraphone, the Viewty Smart, will be available to buy from Orange stores by the end of May.

Available exclusively from Orange, the new handset is the next in the inexplicably-monikered Viewty range, and sports LG's new S-Class interface, featuring a spinning cube for easier navigation.

The Viewty Smart takes over from the original 5MP Viewty, which sold in high volumes the world over, and was seen by many as LG's (and the world's) first successful touchscreen phone, prior to the iPhone's launch.

The Smart has a pin-sharp WVGA screen, so watching DivX or Xvid movies will be eye-bleedingly clear.

The handset itself is 12.4mm thick and weighs 102g, which LG claims makes it the thinnest 8MP cameraphone on the market at the moment, although only with an LED flash unlike the Sony Ericsson C905.

It is also rumoured to have auto-motion detection for the spy-loving among you (although we're still checking with LG on this fact), and even a little sliding door to protect the lens / fiddle with and annoy your partner.

Orange, the official carrier of the device, hasn't given any details on cost or price plans at the moment, but as soon as they let us know we'll update you.