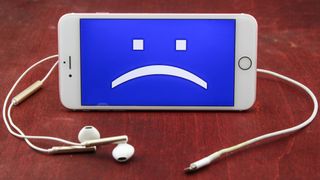 Meet the new iPhone 7, (nearly) the same as the old iPhone 6S. At least that's what you can expect from Apple's next smartphone in September, according to a new report today.

It'll keep the sizing steady with a 4.7-inch iPhone 7 and 5.5-inch iPhone 7 Plus, and neither will see a major shift in design, says the Wall Street Journal.

What is changing? The newspaper echos on-again, off-again rumors about Apple removing the headphone jack in favor of audio sent through the Lightning port or wirelessly via Bluetooth.

This could make the new iPhones thinner (which no one is asking for) and more water-resistant (about time), hardly the refresh you'd expect for a two-year-old design.

iPhone 7 rumors have been all over the place this year. It's said look the same, but include a new dual-lens camera system on the back, at least within the iPhone 7 Plus model.

However, reports that Apple's big camera upgrade were canceled surfaced last week as quickly as they were reversed this week. Is your head spinning yet? If not...

The same goes for the iPhone 7 headphone jack. It's gone, it's here, it's gone, it's here, round and round we go. No one seems to know for sure, except to say say that the 3.5mm port's days are numbered. The new Moto Z and Moto Z Force made that clear.

But, even with all the back and forth, it's hard to believe that Apple would keep the iPhone 7 the same to the point that it's a just boring specs upgrade for 2016. Getting rid of antenna lines doesn't cut it.

Last month, we wrote about how Tim Cook promised that Apple's iPhone upgrades will "give you things that you can't live without that you just don't know you need today."

He didn't say the company was going to "take away things you can't live without" (like the headphone jack). That won't reverse Apple's flatlined iPhone sales trend.

There is a valid reason to think that the best iPhone features may wait until next year. It'll be the Apple smartphone's 10th anniversary.

You can expect a major shift in 2017. The Wall Street Journal notes that Apple hopes to use curved screens that weren't ready for this year's models. Sounds like a true Samsung Galaxy S7 Edge rival.

There are also reports that the company is interested in ditching the clicky home button in favor of an unclickable thumb landing pad that still functions as a fingerprint sensor.

But if no one can say for sure what's being planned for the iPhone 7, there's surely a lot of wiggle room about iPhone 8 rumors, just in case your head has stopped spinning.