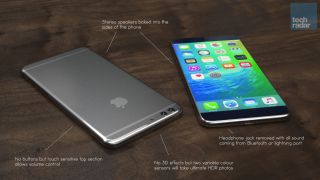 Seven is your lucky number if you're looking to upgrade to the iPhone 7 and iPhone 7 Plus, as Apple has officially announced the date for its next big launch event.

It's Wednesday, September 7, according to the official invite sent to TechRadar and other media outlets. We'll of course be there to bring you all the news and the first hands-on reviews of the new phones.

The San Francisco event may also play host to the Apple Watch 2 announcement. Apple has been rumored to be refreshing its Apple Watch smartwatch after a year-and-half of availability.

There's also an outside chance that Apple will show off its redesigned MacBook Pro for late 2016. However, rumors indicate the new laptops won't launch right away, even if they show up.

At first, the Apple invite doesn't appear to give us much to work with. However, iPhone 7 leaks have given us a glimpse at a new camera on both handset sizes.

The small circles of light appear to be information captured by a camera lens. We've seen alleged iPhone 7 Plus concepts that give the bigger, 5.5-inch iPhone two cameras on the back, like the Huawei P9.

A new camera (or cameras) is a much-needed upgrade to compete with the brilliant Samsung Galaxy S7 Edge and Galaxy Note 7 cameras, and it'll instantly rocket the iPhone 7 to the top of the best iPhone list.

Get the best iPhone 7 deals before anyone else!

We'll send you pre-order details and the best iPhone 7 deals as soon as they're available.