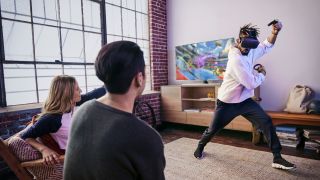 Nearly one year ago – in May 2018 – something amazing happened: Beat Saber, a breakout VR game from Beat Games, hit the top of the Steam charts. It was a groundbreaking moment for VR and one that Oculus’ Vice President of Special Gaming Strategies, Jason Rubin, says is a stepping stone for virtual reality.

In an interview with TechRadar at E3 2019, we spoke to Rubin about some of the major milestones in the platform’s life – including the recent launch of the highly popular Oculus Quest headset – and what the platform will look like in the future.

Rubin’s answer? He believes VR adoption will continue to grow with more virtual reality titles hitting the top of the charts, but he also believes that 2D games will also help introduce – and keep people coming back – to Oculus headsets.

To understand Rubin’s full answer, you have to look a bit into the future, where headsets like the Quest can not only play VR games, but have access to game-streaming services, too.

That’s a wild idea right now as most of the world’s biggest tech companies are just barely starting to talk about game-streaming, but streaming 2D games would be far more immersive in VR than they would be when played on your TV… at least, according to Rubin’s vision.

“Imagine playing Doom Eternal and you get 3D effects – not the 3D you see in theaters – but the actual 3D where you can look around corners and where, when something explodes, fire can come out of the screen. On the side is the leaderboards if you’re playing multiplayer. Your friends are in chat. Down here you have a console to set games up and it just becomes the best possible version of that game – even though it’s not a VR game.

“It’s like the best possible TV, the best possible 3D instantiation of it, and then all the extras you get around it. Because 2D games aren’t going away – there are a lot of advantages in not putting you in something that’s throwing you around – but once that happens, VR usage will go up but VR gaming usage isn’t necessarily in parallel to that.”

So we’ll stream 2D games in our VR headset?

If you’re reducing Rubin’s words to a very simple talking point, yes – essentially he believes that streaming will allow standalone VR headsets to play titles they physically don’t have the memory to store, while adding effects to make the experience more immersive and entertaining to use.

Here's Rubin again: “In this giant mix of things that human beings are going to be doing with gaming, you might use your VR headset for 2D gaming, but still play 3D VR games when it strikes your fancy. That is the promise of VR in a nutshell.”