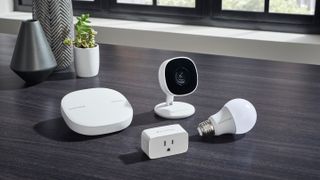 In the ongoing war for your smart home, Samsung’s SmartThings brand is releasing a trio of new products that includes a cheaper Amazon Cloud Cam alternative: the lineup of 2019 products consists of the SmartThings Cam ($89.99), SmartThings Wifi Smart Plug ($17.99) and SmartThings Smart Bulb ($9.99) - all of which go on sale today.

While the Samsung SmartThings Smart Bulb seems to be a shot across the bow of smart bulb competitors Sengled, Philips and LIFX, it’s the SmartThings Cam and SmartThings Wifi Smart Plug that pose the biggest threat to Amazon.

They're a challenge because not only are Samsung’s products cheaper than Amazon’s, but also because they’re also compatible with both major smart platforms, Amazon Alexa and Google Assistant, plus Samsung’s expanding Bixby platform.

The good news is that, according to Samsung, you don't even need a Samsung SmartThings hub for the SmartThings Cam - it works without any additional hardware. Samsung isn't clear if one is required for the Smart Plug and Smart Bulb, but we'd err on the side of caution and buy one if you plan on investing in Samsung's burgeoning smart platform.

The battle for the smart home

In Amazon's defense, however, it's still pretty much the market leader when it comes to smart speakers and smart displays thanks to its Amazon Echo family of devices.

That's an area that Samsung has found real problems breaking into, not the least of which is because of the still-MIA Samsung Galaxy Home smart speaker.

Until that comes out, Samsung's best play into your smart home is its series of QLED TVs that pack in Bixby, or its smart appliances – an area that Amazon hasn't really touched outside of its Amazon Basics Alexa Microwave.

Are three products going to turn the tide in Samsung's favor? Probably not. But, when Samsung finally figures out its Galaxy Home smart speaker, these devices could be the first crucial components in an all-Samsung smart home.