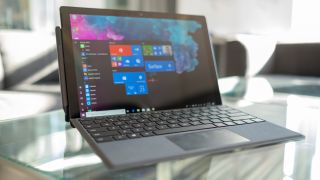 It looks like Microsoft has finally fixed most – if not all – of the problems which have been plaguing the Windows 10 October 2018 Update, as the company has now made the major Windows 10 update once again available to download.

After a series of problems, which Microsoft has described as "small but serious", the initial rollout for the Windows 10 October 2018 Update was paused while Microsoft investigated the problems.

With those problems seemingly fixed, it appears that Microsoft is now confident enough to restart the process of pushing the (now archaically-named) October 2018 Update to Windows 10 users.

Visit our guide on how to download and install the Windows 10 October 2018 Update for a full guide on preparing your PC and downloading the update safely.

One of the most concerning problems with the Windows 10 October 2018 Update was an issue where files were being deleted after installing the update. Microsoft took the issue very seriously – hence the humiliating move of pausing the update rollout – and it has made sure that this problem has been addressed.

According to a blog post by John Cable, Director of Program Management, Windows Servicing and Delivery, "In addition to extensive internal validation, we have taken time to closely monitor feedback and diagnostic data from our Windows Insiders and from the millions of devices on the Windows 10 October Update, and we have no further evidence of data loss."

The rocky launch of the Windows 10 October 2018 Update has been particularly embarrassing for Microsoft, but it looks like it is taking the lessons it learned seriously. As Cable explains "We plan to add a Windows update status dashboard in the coming year to provide more information on any issues that lead to update blocks."

In another blog post, Michael Fortin, the Corporate Vice President of Windows, talks about some of the reasons why the launch of the October 2018 Update was so problematic, as well as detailing the steps Microsoft is taking to ensure this doesn't happen again.

As Fortin says, "Our goal is to provide everyone with only the best experiences on Windows, and we take all feedback seriously. We are committed to learn from each occurrence, and to rigorously apply the lessons to improve both our products and the transparency around our process."