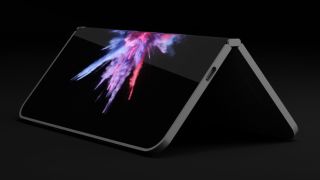 Microsoft may have not delivered on a Surface Phone last night, but Microsoft’s Surface Chief Panos Panay promises the company's working a pocketable Surface device and more.

How can we be so sure? In an interview published today, Panay, Microsoft’s corporate vice president of Microsoft Devices Group, refers to a pocketable Surface device as being “absolutely my baby” before alluding to the existence of Surface devices in other form factors outside of the ones already available.

While it seems like Panay affirms the existence of a much smaller Surface, Panay makes it sound like the devices arrival won’t be coming any time soon – as he stresses that Microsoft “can’t bring new categories into the world and not be a place where customers need it.”

“I think any other form factor you haven’t seen yet we’ve gotta get right, we’ve got to make sure we keep inventing to make it perfect,” he said to The Verge. “I’m not talking about just the hardware, I’m talking about the whole thing. What it means to you, how it gives people the opportunity to be the best that they can be or transforms something they don’t do already.”

The Surface Headphones is a clear representation that Microsoft isn’t afraid of venturing into new product categories as long as its products are novel. Case in point: the new Cortana-enabled headset features some gimmicks we’ve never seen before like rotating control dials and adjustable noise cancellation.

In a second, related interview between Panay and The Verge, it seems Microsoft may have more modular devices in store for us.

When pressed about the Surface Hub 2’s modular design trickling down to a future Surface Studio, Panay said “probably, you look at it and you see what’s the evolution and how do we make it better for our customer. there’s still so much more to do, and while I won’t tell you what it is you can put stories together.”

While that’s basically a non-answer, it’s not a flat-out denial of its existence. There’s at least one Microsoft patent depicting a modular desktop computer according to The Verge.