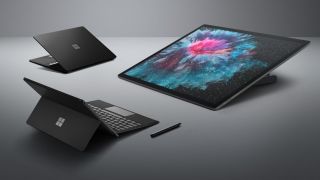 For those of us using 2-in-1s that run the Windows 10 operating system, such as the popular Surface range, Microsoft is looking to improve the overall experience in the coming months.

The latest version of the Windows 10 Insider Preview Build (18970) has included a change to how the user interface is displayed when using a 2-in-1 in tablet mode – when you fold back the keyboard or remove it entirely.

Specifically, the interface will retain more of its desktop-like aesthetics when switching to tablet mode – instead of displaying a full-screen start menu packed with tiles and hiding the taskbar icons, the desktop will remain visible and some other tablet-friendly tweaks will occur.

This includes retaining the taskbar icons but spacing them further apart for easy finger-tapping, as well as collapsing the search bar into an icon, bringing up the touch keyboard via an icon or when tapping on a text field, and optimizing File Explorer for a touch interface.

When these changes roll out publicly, you will no longer be prompted to enter tablet mode when your device deems it necessary, although the mode will still exist as an option for the time being.

At the moment, the change is only available to people using 2-in-1 devices on the Windows Insider program (Windows tablets retain the old interface), and only a select few have access while Microsoft assesses the quality of the changes.

It’s currently marked as a beta feature, but as with any features rolled out to the Insiders program, a public release shouldn’t be too far away, albeit after some finetuning and tweaks are made.