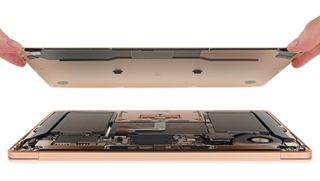 Apple’s devices are notoriously difficult to open up and repair, which can often lead to expensive trips to a nearby Apple store to have your broken MacBook or iPhone fixed or replaced, but it appears that the new MacBook Air 2018 is easier to repair than previous MacBooks.

Repair experts at iFixit have taken apart the new MacBook Air, and while it still has some of the quirks we’ve come to expect from Apple that prevents easy replacement of parts in its devices, such as a glued-on battery, there are some aspects, like a modular Touch ID sensor, which make the MacBook Air 2018 easier to repair.

This doesn’t mean you can easily open up the MacBook Air 2018 yourself and add or remove components, but it appears to be a step in the right direction.

First, iFixit took a look at the keyboard, and as expected it's pretty much the same as the one found in the new MacBook Pro. It has Apple’s Butterfly switches and a silicone membrane that keeps the key presses quiet, and should act as a method to prevent dust and dirt falling between the keys and causing problems.

The crew at iFixit then opened up the body of the MacBook Air 2018. To do this they needed a special pentalobe screwdriver to unfasten the screws, but otherwise, the process was quite straightforward.

As the website states: “This simple procedure brings a smile to our face in comparison to some of the booby-trapped lids we've found on MacBooks and MacBook Pros lately.”

With the MacBook Air open, there’s a neatly laid out (but compact) array of components on display, including a small logic board, fan, the speakers (which in our review we found to be one of the highlights of the new MacBook Air) and a “radiator-esque heat sink”.

As iFixit continued to explore the MacBook Air, the team found that the two Thunderbolt 3 ports are modular – a repair-friendly design that means the ports can be easily replaced if they become faulty. The Touch ID sensor is also modular, so it can be replaced without having to switch out the whole logic board.

There were also 10 adhesive tabs that secured the battery and speakers, and iFixit observed that “the mere presence of stretch-release adhesive generally means that someone at least thought about possible repair and disassembly situations.”

The iFixit team also found that the battery of the new MacBook Air is glued to the chassis, but as MacRumors reports, Apple will be providing Apple Authorized Service Providers with tools to replace the battery without having to replace the case. This makes it an easier, more affordable, fix that’s also better for the environment.

While these repairability improvements are welcome, it’s not all good news on that front, with iFixit awarding the MacBook Air 2018 a low 3 out of 10 repairability score.

“The Air still uses external pentalobes to keep you out, requires lots of component removal for common fixes, and both RAM and storage are soldered to the logic board,” iFixit concludes.

So, while the MacBook Air 2018 is more repairable than previous MacBooks, we’re still a long way off from DIYers being able to open up and fix their own Apple devices. We hope Apple continues to improve the repairability of its products in the future.