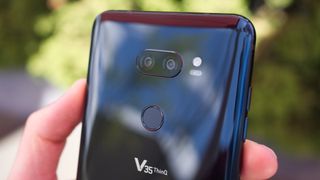 If you're hoping the LG G8 will be the phone that packs in every single bit of top-end technology, chances are you'll be disappointed this year. Where some brands are said to be joining the 5G train early, LG looks set to miss that feature for its upcoming flagship.

However, in a perhaps smarter move, it's going to launch a phone with the high-speed connectivity later in the year.

The news comes from Korean site ET News (translated), which quotes an unnamed senior official as saying that LG will launch two smartphones this year to separately service the current 4G needs and the next-gen 5G speeds.

An official statement provided to the outlet by an LG spokesperson didn't confirm the news, but did say that the brand was committed to 'pre-empting' the 5G rollout.

Bringing a phone that doesn't come with 5G but still offers top-end features could be the more intelligent strategy for 2019, as adding in the next-gen speeds will add quite a cost to smartphones (as confirmed by OnePlus' CEO to TechRadar) so if LG wants to be competitive with the G8, missing 5G could be a good move.

The same report also says that the new LG G8 will pack a teardrop small notch at the top to allow for the front-facing camera (no punch-hole option here) and the camera will have 3D capabilities.

We saw that Sony is betting big on 3D capabilities in 2019's flagship smartphones, and it looks like LG is jumping on that boat in order to improve the augmented reality capabilities of its smartphones as well as improve the quality and scene recognition of its cameras.

On top of that a flexible phone will appear in the second half of the year – and a (World Intellectual Property Office) WIPO patent spotted by LetsGoDigital might have uncovered the form factor.

The patent outlines a phone that has multiple cameras on the rear, but a form factor that scrolls out sideways to turn a small phone into a tablet.

We've no idea if this phone is going to be the final form factor, but this is the kind of space-age thing that we're hoping starts to appear soon to take us away from the million of faceless black rectangles we're seeing these days – so we're keeping our fingers crossed.