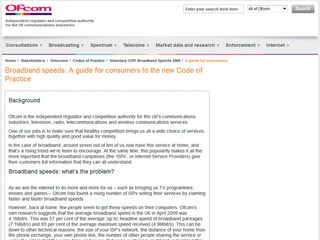 We explain where you stand if your ISP is underperforming

The competition between the various companies vying to provide your broadband service is intensifying, and internet service providers are making increasingly dramatic claims to get your attention and your money.

With broadband contracts typically lasting for several years, it pays to do your homework to find out exactly what these deals deliver. It's also important to understand that 'up to' or even 'average' speeds will not always refer to your personal situation (depending as it does on the position of your local exchange and the quality of the wiring).

But what if you've already taken all these factors into consideration and you're still not getting the service you expect? Where do you stand legally?

We spoke to Stephen McGlade, solicitor for Which? Legal Service, to find out what you can do to get out of a broadband contract when it isn't delivering what was advertised, who you can contact for help if you're having problems, and whether the way you bought the contract makes a difference.

Q. What can you do if you've signed a three-year deal with your ISP, but your connection turns out to be slower than described, unreliable or ultimately unfit for the job? How can you extract yourself from the contract?

A. On the face of it, you could argue under the Supply of Goods and Services Act 1982 that the ISP isn't providing the service contracted for, and you could terminate the contract for its breach of that agreement. However, you'll need to look at the small print, because most service providers say 'up to' a specified amount - in which case, you will be bound by the contract.

You should also quote Ofcom's Broadband Speeds: A Guide for Consumers to the New Code of Practice, because your ISP provider may be in breach of this code.

If you entered into the three-year deal on the basis of statements made that have turned out not to be true, then you could also set the contract aside under the Misrepresentation Act 1967 without incurring any financial penalty. You should inform the company of this in writing. You can also complain to the Advertising Standards Authority, which will investigate your complaint.

Always go back over your contract and read the section that relates to the 'service level agreement' or 'level of service'. This section is a description of the specific services that your broadband provider is bound by contract law to fulfil. If you don't think your provider is meeting this service agreement adequately, then you should have good grounds for your complaint.

Q. Are you entitled to compensation?

A. The broadband provider is contractually bound to deliver the service you agreed to pay for with reasonable skill and care under the Supply of Goods and Services Act. This means that it has to come up to the standard of the reasonable, competent ISP.

It would also be expected to comply with the Internet Service Providers Association Code of Practice, so it has to take your complaint seriously if you don't think it's keeping up its end of the agreement.

Furthermore, if you signed up to a broadband service that was mis-sold by the provider directly, you should complain to it, follow its complaints procedure and report the matter to Ofcom. It might say it's the fault of an agent who mis-sold the package.

If, however, the third party was acting as an agent for the ISP, then don't be fobbed off. The ISP would be liable, because the agent would be deemed to be acting on behalf of the principle (the ISP).

For any other type of complaint, as your service provider, it is the ISP's responsibility to deliver that service to you, and it should still be able to give you a realistic timeframe and course of action to get any matter resolved for you. You should be compensated for any period during which your broadband can't be used, if this is the fault of your service provider.

If after a period of eight weeks you have been unable to successfully resolve your complaint, the Communications Act 2003 sets out that all communication providers (including broadband providers) need to subscribe to an Alternative Dispute Resolution (ADR) scheme that offers access to impartial and free arbitration.

There are currently two such schemes, both of which provide lists of their members: Otelo (Office of the Telecoms Ombudsman) and CISAS (Communications and Internet Service Adjudication Scheme). Technically you can still take your broadband provider to court after an ADR has looked at your case, but most customers tend to accept the decision of the ADR, especially because an ADR can force an internet service provider to pay compensation.

Always go through the ISP's internal complaints procedure first, and then refer the complaint to Otelo or CISAS if it remains unresolved after eight weeks. If you can't bear to wait eight weeks to escalate your complaint, you can refer it to the Internet Service Providers Association if your broadband provider is a member. If you decide that you still want to proceed with court action, it's a good idea to seek legal advice first.

Finally, under the Supply of Goods and Services Act 1982 (as amended) a consumer can claim a full refund or compensation if they can prove that the service was not delivered as described. There may also be a claim under the Misrepresentation Act 1967.

Q. If you aren't happy with your ISP's service, could you exercise a cooling off period if you bought the deal within the last day or two?

A. The Distance Selling Regulations 2000 give consumers rights when shopping online or by mail order. Under the regulations, consumers shopping this way have the right to clear information, a cancellation period of seven working days and protection from fraudulent use of a credit card.

For services (including broadband contracts), the cooling off period ends seven working days after the day the initial order was made. If you agree to the service beginning within the seven days, your right to cancel ends when the service starts. So effectively, you must give up your right to cancel early, but this must be clearly communicated and with your express agreement.

If you want to cancel during the cooling off period, remember that unless the supplier sent written confirmation of your order no later than the time of delivery of the product or performance of the service, your seven-day cooling off period will not begin until it does, and may be extended by a further three months.

Q. If you do, will you wind up in hot water for breach of contract?

A. As mentioned earlier, you need to find your contract and take a close look at the 'service level agreement' or 'level of service'. This describes exactly what your ISP is bound by contract law to fulfil. If you don't think your provider is meeting the terms of this service agreement, you'll be in a strong position if you decide to make a complaint.

There are a few mechanisms for making a complaint about your ISP's performance. In the first instance, a broadband complaint should go through the internet service provider's internal complaints procedure. Keep records of all written and verbal communication with your ISP.

If the internal procedure fails, eight weeks after the date of the original complaint (whether verbal or written), you can take it to the Telecommunications Ombudsman (Otelo) or the Communications and Internet Services Adjudication Scheme (CISAS). Every broadband ISP must belong to one of these two complaints schemes.

Next Page How to change ISP
See more Internet news