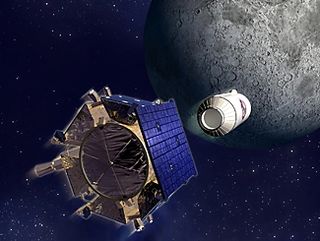 LCROSS – not to be mistaken for Lacrosse, as that would be silly

Nasa has been successful in its bid to bomb the moon in a search for water, with its LCROSS spacecraft smashing a rocket into the lunar surface earlier today.

Although we are yet to hear if there is actual water beneath the surface of the moon, Nasa streamed the whole explosive affair live on its Nasa TV service, showing workers for the space company whooping and clapping for joy when the empty rocket hit.

Travelling at speeds of 1.6 miles a second, the rockets were propelled from Nasa's Lunar CRater Observation and Sensing Spacecraft (LCROSS), swiftly followed by a probe rocket.

The probe will be sniffing around to see if any ice or water particles are found as a result of the explosion.

There is great significance in finding water on the moon, as it could pave the way for a self-sufficient space base which Nasa hopes to build by 2024.

The Telegraph is reporting that Nasa had a great deal of help from Durham University back in the UK in finding the right spot to 'drill' for water, with Dr Vincent Eke, from the Institute for Computational Cosmology at the University of Durham, telling the paper: "Water ice could be stable for billions of years on the Moon provided that it is cold enough.

"If ice is present in the permanently shaded lunar craters of the Moon then it could potentially provide a water source for the eventual establishment of a manned base on the Moon.

"Such a base could be used as a platform for exploration into the further reaches of our solar system."

As long as they call the moon-base Moonraker, whatever they use the space station for is fine by us.