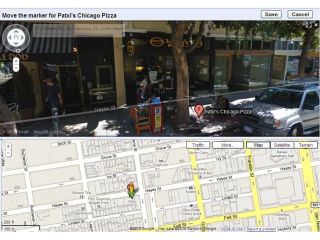 Google is to give users of Street View the chance to edit the service to make it that little bit more accurate.

An 'edit marker' feature has been added, which would allow you to change where businesses are.

So, if you look at Street View and find that the marker for a shop or pub nearby you isn't quite right, then you can lift it up and change its location.

"Sometimes you may find a place in Google Maps that isn't quite positioned where it should be," says the blog.

"Let's say you know that your favourite pizzeria is near the corner but the marker for it appears further down the block. You want all hungry pizza-cravers to be able to find this great spot, so you want to make sure the marker leads them directly to the storefront."

The blog continues: "You could use our map editing feature (the 'move marker' edit) to move it to the right place, but moving the marker to the right location is not always that easy, especially in denser urban areas, if the only reference you have are maps or satellite images because you can only get a view from above.

"So now we have added one more very handy reference for making a map marker edit: Street View images. It makes the edit much easier."

This wiki approach is something that Google seems to be embracing more for its services like StreetView.

Just last week, Google also announced that you could also edit the information given to businesses flagged up on Street View.