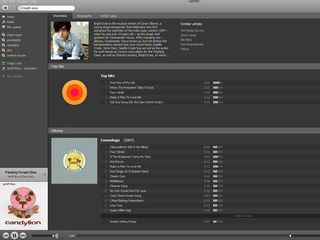 Few things have excited the music industry as much as Spotify recently. It's the hottest music app in town and it even has the national press jittery with excitement.

The reason? Spotify represents a major shift in focus for an industry currently ravaged by digital confusion, piracy and DRM.

In short, it's an ad-supported music application that allows you to listen to any track absolutely free. As far as PC and Mac users are concerned then, it's just like iTunes - but you don't have to pay for the music. The only downside is that you hear a 20 second advert every 10 tacks or so. For a small fee, you can opt out of these ads.

In fact, people are so excited that Spotify is being hailed as a genuine threat to the market-dominating iTunes. That might be the case, but before Spotify can really lay claim to the industry it's going to have to improve in eight key areas:

1. Access on portable devices
The most obvious drawback of Spotify is that it's limited to home PC use. By contrast, if you buy a track via a download service then you've got the option of loading it onto your phone or MP3 player and listening to it on the move.

But the solution to this is simple: Spotify could partner with phone and MP3 player manufacturers in order to build the app into their devices. Using Wi-Fi and 3G connections, people could then stream music from Spotify on the go and they wouldn't even need any locally stored content.

A cache on the devices would also mean tracks only need to be streamed once - saving bandwidth. Britain's national Wi-Fi infrastructure isn't currently up to the job, but as soon as it is, Spotify will need to be ready.

It has to be said that iTunes is inextricably connected to the iPod and as long as Apple's music player exists, so will iTunes. However, as Apple is unlikely to ever offer Spotify integration on the iPod, it's plausible that offering Spotify integration might someday see normal MP3 players becoming as popular as the ubiquitous iPod. Maybe Apple will have to adopt Spotify's business model in the future? But that's another article entirely...

2. Downloads
Downloads are not currently part of Spotify's business model. However, if it really wants people to migrate from iTunes, it may have to reconsider this decision.

People expect to be able to purchase and own music. As portable streaming from Spotify isn't currently available, maybe downloads could be used to bridge the gap. It doesn't seem likely this will happen, though, because Spotify uses the Vorbis codec and it would need to use MP3 if it were to supply downloads. Unfortunately, that would cost Spotify more than it's probably willing to spend.

3. Digital Radio streaming
While we're waiting for Spotify to appear on our portable gadgets, it would be much easier to first build it into devices in our own homes. Many digital radios now come with the ability to wirelessly stream music from a PC over a home Wi-Fi network and Spotify should get in on this.

If Spotify could partner with the likes of Pure, it could get itself used in people's kitchens instead of just offices and bedrooms. And as people are already used to hearing adverts on the radio, it could afford to pump out a few more ads on these kinds of devices to support the development costs.

4. More music
It's an obvious point really, but one that needs to be made. Spotify currently has a great catalogue of music, but compared to iTunes, it's still relatively small. Luckily, Spotify is currently adding 10,000 songs every single day. So if your favourite album wasn't on Spotify yesterday, it may very well be there tomorrow.