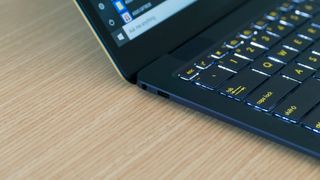 Intel is pushing hard to make sure Thunderbolt 3 is the future of wired connectivity, announcing an aim to bring the ports to laptops everywhere through integrating Thunderbolt 3 with future processors.

Better yet, the firm plans to fully release the protocol spec for the industry at large to work with, dropping royalty charges.

Thunderbolt 3 being built directly into the CPU will mean that laptop manufacturers will be able to ditch the separate components currently required to bring support for the connectors – meaning more internal space, and thus the ability to make the device thinner and lighter (or perhaps to fit a bigger battery, or go for a similar internal boost elsewhere).

The other major prong of Intel’s push here is to make the Thunderbolt 3 spec available to third-party chip manufacturers on a completely royalty-free basis as of next year, making it a far more tempting prospect for chip developers to embrace.

All of this should mean wider use of the port across peripherals and computers alike. Intel foresees a world in which all ports on a laptop can be the same: namely Thunderbolt 3, with its inherent flexibility – offering data transfer, power and video signal all across one port.

Of course, there are already machines which use Thunderbolt 3 USB-C ports, with Intel noting that there are in excess of 120 PC designs out there which use the connectors – with that number expected to reach 150 by the end of the year.

The company also gave a major nod to its partnership with Microsoft.

Roanne Sones, GM of Strategy and Ecosystem for Windows and Devices at Microsoft, commented: “Microsoft and Intel are working together to enable Thunderbolt 3 on Windows PCs to deliver on the ‘if it fits, it works’ potential of USB-C. The Windows 10 Creators Update enhanced plug-and-play support for Thunderbolt 3 devices, with additional enhancements planned for future OS releases.”

Intel further underlined Thunderbolt 3’s diverse range of benefits across various applications including streamlined single-cable docking stations for mobile devices, "lifelike" virtual reality – delivering 4K resolution in VR with just one cable – and, of course, using the port to hook up an external GPU for powered-up gaming on any laptop.

Can all this help Thunderbolt 3 to make some big strides forward? We can’t be certain of that, but it definitely seems like these moves – integrated support on the CPU, and the end of getting stung for licensing charges – are both major steps forward in the push for more widespread adoption.