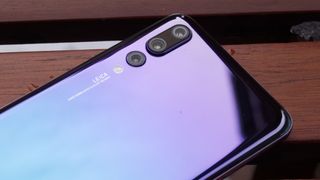 We’re talking about the Twilight shade, which shifts from blue to purple, as you can see below in the picture shared by reputable leaker Evan Blass. This is the second time we’ve seen this shade so it’s likely coming.

Other than the color, the image also shows other things we’ve seen before, including the triple-lens rear camera arranged in a square, the slightly curved edges and the notch above the screen.

Top of the charts

We’ve also got news about the standard Huawei Mate 20, as that phone has seemingly appeared on the AnTuTu benchmark, as spotted by BGR. But more than appearing on it, it just about tops it, with a score of 313,561. The Samsung Galaxy Note 9 for comparison scored 283,641.

Though while its score tops any Android handset, it’s still behind the 363,525 score that the iPhone XS achieved.

But we have little doubt that the Mate 20 range will be very powerful. The Huawei Mate 20 Pro for its part has already topped most Android phones in the Geekbench benchmark.

This performance is likely down to the Kirin 980 chipset that the range is set to use – it’s the first 7nm Android chipset (with the smaller size leading to more efficiency), though Apple’s latest phones also use a 7nm chip.