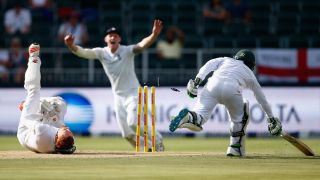 The company will use Intel Falcon 8 Drones to conduct in-depth pitch analysis, while sensors implanted in players' bats will give viewers insights into stroke play by monitoring back-lift, bat speed and follow-through.

Intel is also setting up VR zones outside the Edgbaston and Oval stadiums in the UK to offer cricket fans a variety of VR experiences, including testing their skills against a virtual bowler.

Cricket hasn't been shy about embracing technology in the past. Back in 2001 the Hawk-Eye system was introduced, which enabled viewers and match officials to track the trajectory of the ball and predict its likely path. It revolutionised the game, and is widely used to assist with umpiring decisions in major tournaments.

While there were some critics of that technology in its early days, they've largely come around to its use, and now Intel wants to use tech to further enhance the viewer experience.

Its drones, equipped with high-definition infrared cameras, will be used to give TV viewers and commentators an in-depth look at the wicket during the all-important pre-match pitch analysis.

The sensors, meanwhile, have been developed by India-based smart wearables company Speculur. The BatSense system is powered by Intel Curie technology, and the sensors can be mounted on any bat to generate data for every stroke the batsman plays.

The bat sensors will be used by several players during the Champions Trophy, and should provide invaluable data to those players as well as to viewers and broadcasters.

Pit your skills against a VR bowler

Sandra Lopez, Vice President, Intel Sports Group, said: “Our goal is to lead the way forward into the digitisation and personalisation of sports, transforming the way fans and athletes experience sports.”

The VR experience zones at The Oval and Edgbaston will let fans face a virtual bowler while wearing a head-mounted display, using bats equipped with the same sensors as those used by the players to give them feedback on their performance. Speculur has also announced plans to bring its BatSense technology to consumers in India, Australia and the UK later this year.

The 2017 ICC Champions Trophy takes place between June 1 and June 18 at venues in England and Wales.