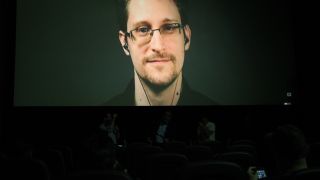 While San Diego Comic-Con attracts a number of high-profile names, it was still surprising to see Edward Snowden's face beam down at a small cinema audience just a few blocks away from the chaos of fans celebrating fictional heroes and villains alike.

"I don't think anybody looks forward to having a movie made about themselves, particularly someone who's a privacy advocate," said Snowden via live stream.

Of course, the NSA whistleblower is considered both a hero and villain, depending who you ask, so it was fitting to hear him speak following the private screening of the film Snowden, which just so happened to coincide with the first official day of Comic-Con 2016.

Director and co-writer Oliver Stone, along with the film's stars Joseph Gordon-Levitt (who plays Snowden) and Shailene Woodley (who plays Lindsay, Snowden's long-time girlfriend) also attended the screening and joined Snowden for the Q&A session afterwards.

While the powerhouse celebrities were available right in front of us, most of the questions were directed at Snowden, which reached him with a small delay.

Snowden currently lives in asylum in Moscow, Russia, with Lindsay. "I can confirm that I'm not living in a box," he said. "Actually, I live a surprisingly free life. This was not the most likely outcome. I didn't actually expect to make it out of Hawaii. I did not have a plan beyond getting the story out there."

He obviously did manage to find his way from Hawaii in 2013 to Hong Kong, and eventually to Russia. He has since been working with the American Civil Liberties Union (ACLU) and the Freedom of Press Foundation.

"Everyday I'm working on something now that I can be proud of," Snowden said.

"I love my country, I love the things we try to do. Top line, I have serious policy disagreements with some agencies, particularly the senior officials."

Still, he made clear that "the working level guys are, by and large, good people trying to do the best they can."

"But they are often ordered more or less to do bad things for what they believe are good reasons," he said. "I don't have to worry about that any more."

Snowden recently revealed that he's developing an iPhone case that can use a phone's SIM slot to monitor and shut down its radios in the event of unauthorized access.

"I don't like to tell people what to do, how to think, how to vote," he explained. "But there is a civic responsibility here of all of us as citizens to sort of weigh in and direct and influence the thinking of our communities. This doesn't have to be on a platform, this doesn't have to be on a stage. Those of us who have a platform should use it."

The film tracks Snowden's journey from joining the CIA to leaking the NSA's mass surveillance program of US citizens to the media, which led the US government to cancel his passport and unseal charges against him of two counts of violating the Espionage Act of 1917 and theft of government property.

Though the film delves into Snowden's private life and professional relationships, it's not quite a typical espionage film or biopic. As Stone explained it, the film is "a dramatization based on the chronology of the facts."

Clearly, however, some elements of the film had to be changed, including a scene shown in the trailer involving a Rubik's Cube.

"These are things that are actively under investigation," Snowden, who also appears briefly in the film, said. "This is one of the things that made it such a challenging story for Oliver to tell."

"There are some things that aren't in the public record and they won't be, for the near future at least given the precarious nature of my situation," he went on. "I still can't go home, and we don't know when that will change."

But what the movie does do, Snowden explained, is make the issues and discussions that are so clearly laid out in the film accessible to a very large audience.

"They can reach new audiences in new ways and get people talking [about] things that they don't have time to read, to look for, in the academic setting," Snowden said. "Nobody's going to go out there and read 3,000 articles that have been published about this. They're not going to be able to scrutinize congressional hearings and testimony."

"When you see something visually, compounded with auditory knowledge, it triggers a different part of your brain than if you're reading an article or if you're simply watching an interview," Woodley added.

As for Gordon-Levitt, the success of the film comes when he sees "this movie inspire people to have these conversations."

"These are the conversations that we weren't able to have, because we weren't privy to the information prior to Ed's disclosures," he said, "and if this movie can stimulate those conversations, then I feel very happy about that"