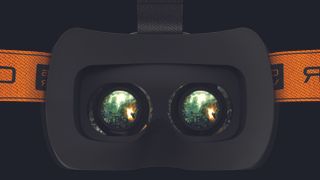 Razer, the company known for countless quality gaming mice, headsets and keyboards has had a leg in the virtual reality (VR) for over a year now, but it's been rather quiet about the whole thing.

At E3 2016, Razer's getting loud about its VR plans with a vastly upgraded and way more affordable PC gaming headset. Of course, it's called the HDK 2.

Yes, that still stands for "Hacker Development Kit," but I'm told that Razer wants to push this version a little – or more likely a lot in a few months – more toward PC gamers directly as well as game developers. But just wait until you hear what it's got cooking.

What's under the visor?

This year's version of Razer's Trojan horse into the VR dominion comes packing an OLED screen that beams a sharper, 2,160 x 1,200 image (that's 441 ppi) into your eyes at a 90Hz refresh rate – 100% parity with the Oculus Rift and HTC Vive headsets.

And, just in case you're still dubious, the previous HDK was merely 1080p at 60Hz and 401 ppi for $300. So, all of that for $200 less than the Rift should help the price hike sting a little less. Plus, improved, adjustable optics means support for those with poor vision without need for glasses. (We'll see just how that one pans out.)

Finally, Razer promises that the HDK 2 will soon support all of the games that both Oculus and HTC's headsets do. I'm told that the team is working on implementing a multi-camera setup – HDK 2 comes with just one IR camera at 100Hz – and that motion controllers are already supported.

A single headset that half as pricey as the most premium one and matches its components spec for spec? Why isn't Razer just selling this thing whole hog then?

You gotta keep the 'open' in open source

I asked the Razer team that very question when they showed off the HDK 2 news to me recently, and I was told that the firm isn't as interested in competing as it is seeing to it that there's a single, widely available standard for new and veteran game developers.

Having support from multiple partners – like Intel, Leap Motion and Gearbox Software – likely helps to keep hardware costs down, while there's little pressure with zero branding on the device. Even if Razer were to develop VR gaming accessories, they would be designed with open source in mind, I'm told.

To spur support for HDK 2, Razer and the OSVR coalition of companies have started a $5 million developer fund. The program will bolster the already huge 350-developer-strong community with techniques like buying game keys for hardware bundles and convention showcases.

And, in the end, you get a cheap, capable (if still a work-in-progress) VR headset that can play anything the big boys can. The year of VR is upon us indeed.

The Razer OSVR HDK 2 is slated to land this July, most likely through Razer's own online store. While you wait for our full review, keep reading TechRadar for the latest from E3 2016.