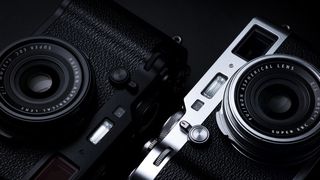 The Fujifilm X100V is edging closer to its official launch, according to the latest rumors, which suggest the iconic street photography camera will return for its fifth installment on February 4.

The latest speculation from Fuji Rumors states that the compact camera, which will succeed the Fujfilm X100F, will be announced at the Fujifilm X Summit that kicks off at 3pm Eastern Time on that date. That works out as 8pm GMT, or 2am on February 5 if you're in Australia.

Interestingly, Fuji Rumors says the Fujifilm X-T4 won't be announced at the same time, with that larger APS-C camera coming at a later date, possibly in late February or March.

The imminent arrival of the Fujifilm X100V has been backed up by some credible leaks, which show that the camera could well have a two-way tilt screen for the first time. While this might upset traditionalists who covet the simplicity of its predecessor's fixed screen design, a tilt screen would boost its versatility when shooting street scenes from high or low angles.

Star of the tilting screen

The apparently leaked image above from Fuji Rumors shows the X100V's tilt screen in action, along with what appears to be a relatively unchanged rear design. Due to the lighting, it's tricky to tell if Fujifilm has retained the d-pad, but we'd be surprised if this has changed.

What else can we expect from the X100V? Other details are a little sketchy, but the camera is likely to have the same 26.1MP APS-C sensor as the Fujifilm X-Pro3 and also inherit similar autofocus performance. While the X100V is very much a stills-focused camera, we're also expecting it to be able to shoot 4K video.

The addition of new hardware features like the tilt-screen could well justify a price increase, but we'll let you know the official pricing as soon as we get it from Fujifilm.