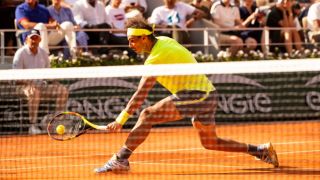 So here we are at the last Sunday of the 2019 French Open. It's all about whether Rafa Nadal can win his 12th title at Roland-Garros, or if Dominic Thiem can win his first ever Grand Slam. You can watch every swipe, swing and smash using a 2019 French Open live stream from anywhere you are - you just need to use this ace (sorry) guide.

The French Open takes place at Roland-Garros in, you guessed it, Paris, France. It's running from Sunday, May 26 until the Men's Final on Sunday, June 9.

While reigning men's champion Rafael Nadal is known for his dominance on clay courts. That's probably why he has managed to secure the record for most French Open titles claimed, ever. If he wins the 2019 French Open that will be a mind-blowing twelfth title - and he's safely in to the final after a straight sets victory over Roger Federer.

His Austrian opponent is seeded fourth here and upset the odds by beating Novak Djokovic in a windy five-set thriller in the semi-finals. He'll inevitably win a major title at some point, but will it be here in Paris at the 2019 French Open?

On the women's side of the event, Australia's Ashleigh Barty took her chance to make it all the way to her first Grand Slam final and then tie up the championship against teenage non-seed Markéta Vondroušová.

We're in for another splendid day of tennis action and here's how you can live stream all the French Open 2019 tennis excitement from wherever you are in the world.

Live stream the French Open tennis 2019 from outside your country

So that's game, set and match for Express - but there are other fantastic VPN options out there as well:

The best 3 VPNs for streaming sport online
1. ExpressVPN:  the best all-round VPN for streaming, comes with 30-day free trial and three months free with a one-year sub
2. NordVPN: SmartPlay tech makes NordVPN a great choice for streaming
3. IPVanish supports up to 10 devices, so great on the go

How to live stream French Open tennis in the UK free

Good news for UK dwellers, the French Open 2019 will be aired by ITV 4 in the UK, meaning it's totally free to watch. That also means you can use the ITV Hub app to watch on many devices including smartphones, tablets, TVs and consoles – plus you can catch up whenever you want.

How to live stream French Open tennis for FREE in Australia

Kayo Sports subscribers get the premium French Open experience, and will be able to stream all the action live as it happens each day, and by combining its SplitView and new (and exclusive) CourtView features, you can select from a variety of different views from various courtside cameras so you don't miss a single detail. If you don't currently have a Kayo Sports subscription, you can take advantage of the free 14-day trial to catch the Grand Slam.

The matches will also be shown live from 10pm to 4am ADST on free-to-air channel SBS Sports and streaming via SBS On Demand – and that includes the final, semi-finals and quarter-finals. So you should be able to enjoy the action on TV as well as on streaming services and devices that support the channels.

How to watch the French Open 2019: US live stream

In the US both NBC Sports and the Tennis Channel will air the action.

If you're outside the country you can always use a VPN to get access to the otherwise geo restricted content to enjoy as if you were at home.

And if you're a cord cutter that wants to catch the tennis without signing up to a lengthy, expensive plan, you could always try one of these sports streaming sites. They all have free trials going for them, too:

The best way to stream the French Open 2019 in Canada

In Canada the rights to all the tennis Grand Slams are owned by TSN, and the 2019 French Open is no exception. So that means you can access this via your TV, online or on the TSN app if you have access to the service. RDS should also offer coverage this year.

If you want to catch it but are out of the country, you can use a VPN to access the tennis coverage.

The best way to stream the French Open in New Zealand

In New Zealand you're going to be able to catch all the action on Sky NZ, although this is a paid-for service. It includes access on mobile and tablets via the Sky Go app.

If you want to catch it but are out of New Zealand over the fortnight, you can use a VPN to access the tennis coverage.